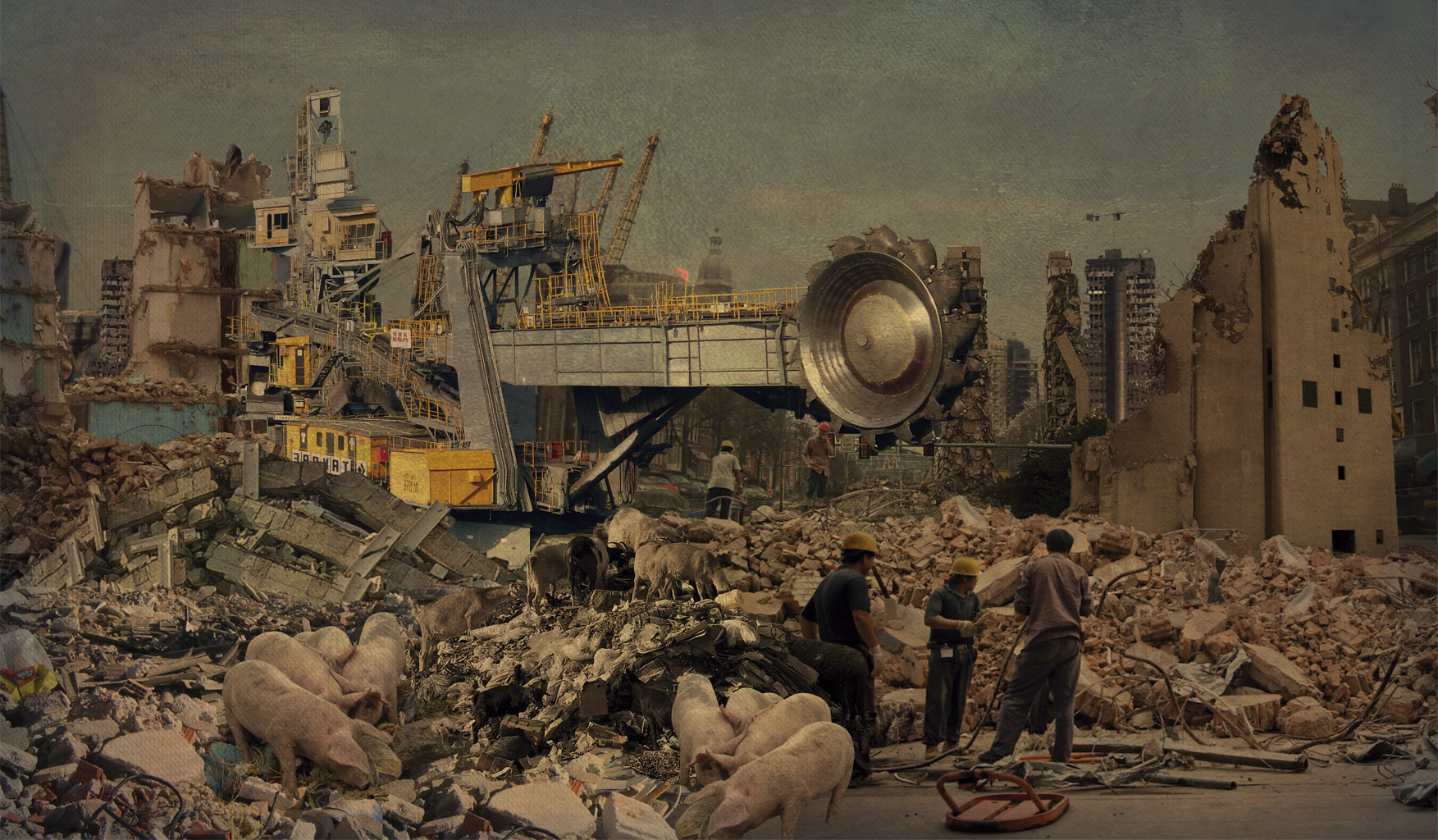 The most disturbing and interesting images of the origin of Madrid’s Gran Vía are directly related to the true nature of the intervention: the destruction of the city. In them, a fascinating scenario of ordered demolition overlaps with the normal life of a second-tier European capital. In many ways, the Gran Vía can be seen as simply one of many small scale replicas of Haussmann’s transformation of central Paris during the Second Empire. In a process of forced displacement of the population, the city’s working masses were exiled to the periphery: the new wide boulevards facilitated the mobility of the repressive force that attempted to control the riots. The Paris Commune was crushed with astonishing ease, thanks in part to Haussmann’s surgical engineering (he used to define himself as an artiste démolisseur), his dissections and amputations. This social engineering of a clinical order can be read as a brutal example of what the Austrian economist J A Schumpeter terms an innovative process of destruction: ‘Capitalism is nothing more than a constant process of creative reorganisation regulated by cyclical periods of destruction.’ For Gran Vía we propose to extend the process of the Gran Vía to today and convert it into an anti-replica, stripping Haussmannisation of its medical and repressive attitudes, and making the destruction of the urban fabric an incubator of freedom spaces – releasing the communards from their coffins. We could then celebrate the destruction and its toxicity as reverse constructions and convert them without cynicism into a standardised, creative, discussed and celebrated process. Could Gran Vía II – this review of Haussmannisation and the conversion of its waste – suggest an alternative to the toxicity and low quality of 10,000,000m2 of houses built in Spain in the last 10 years?

Five series of machines that work for The Big Mech & Co are charged with converting the toxicity of the low-quality urban fabric into ecosystems and small autonomous constructions linked to emerging social groups. The first of the series is responsible for the digital de-fabrication of buildings and infrastructures, and is basically a logistics platform that places and removes both the resulting waste and the remote-controlled robots that perforate, tear and separate the urban fabric. The second series, however, is a brutal device for grinding and masticating all kinds of materials without precision. Dedicated to high-volume, non-selective demolition, it chomps through buildings and topography, sieving, separating, mechanising and finally compacting all types of waste, inert and non-inert. The third series – landscape plotters – sow, replant, irrigate, process waste and produce compost. Using hydro-seeding technology, they replant bushes and small trees. The fourth series is a topo-shaper that processes the topography of the deconstruction. A string of road rollers, graders, bulldozers and pavers transforms the new ground of the de-fabrication process into valleys and hills that support the further formation of ecosystems. The last series of machines is dedicated to the manufacture of instant monuments that restore the edges of the path of destruction. A three-storey conveyer on a huge caterpillar serves as a logistic platform for a battalion of scissors, baskets and cranes that support cutting robots, digital welding and assembly heads. It also controls a chain of machines that prints, cuts and assembles plastic films for the inflatable formwork of the instant monuments. 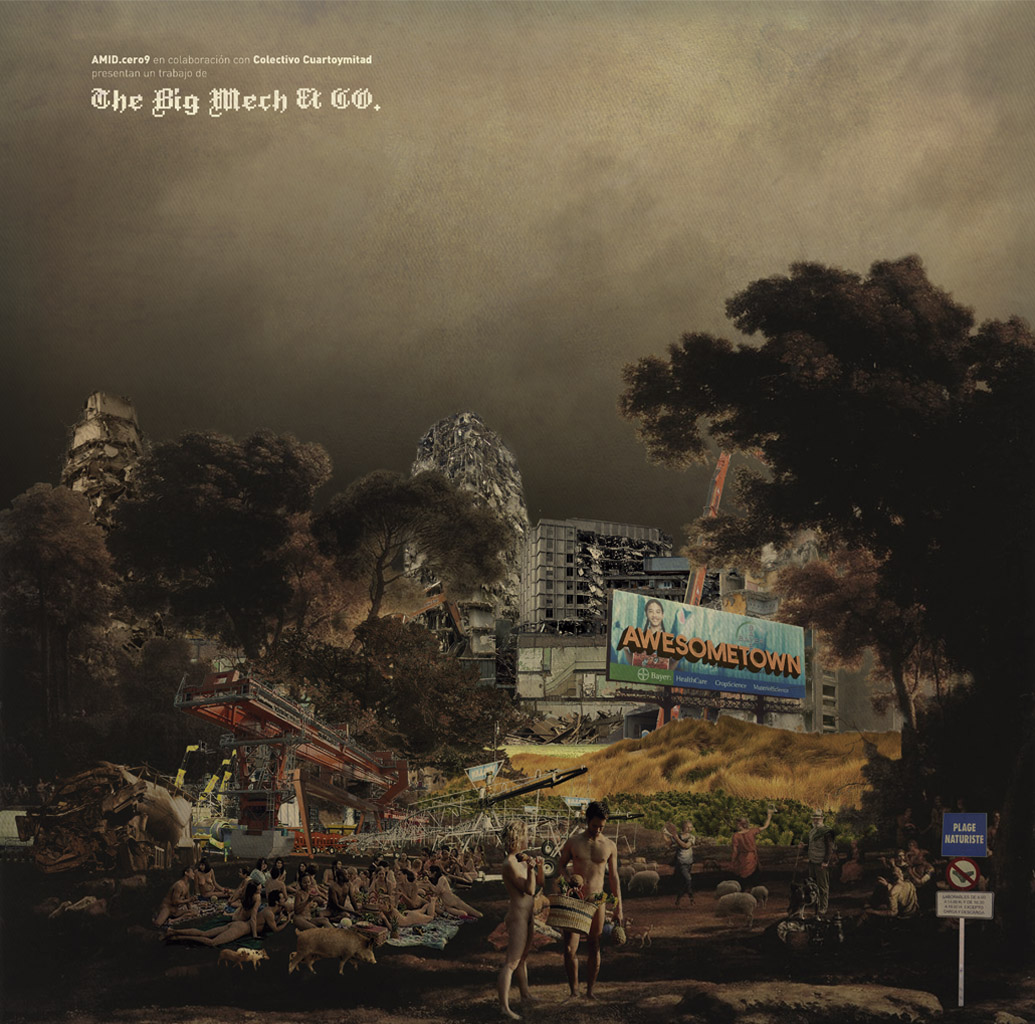 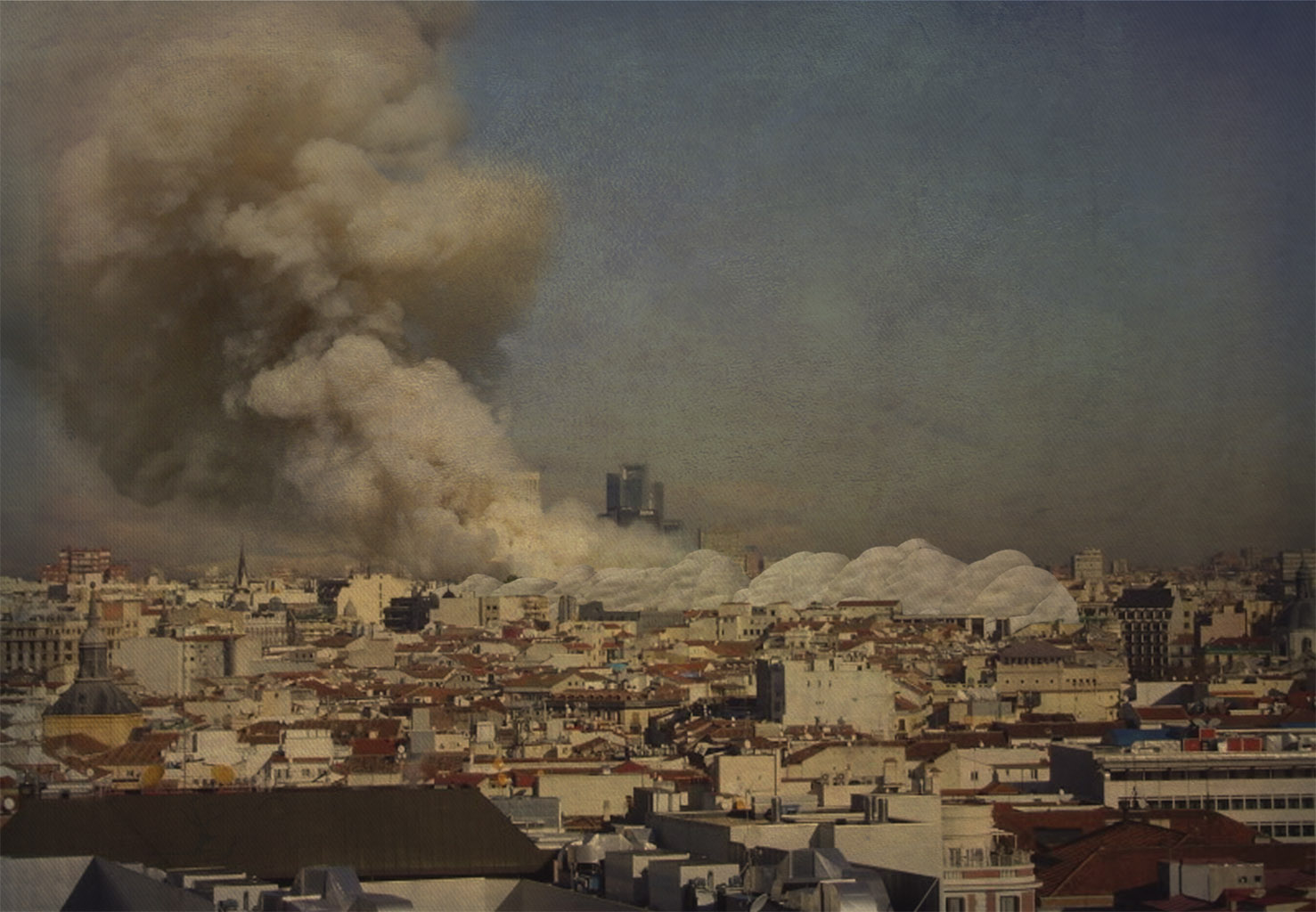 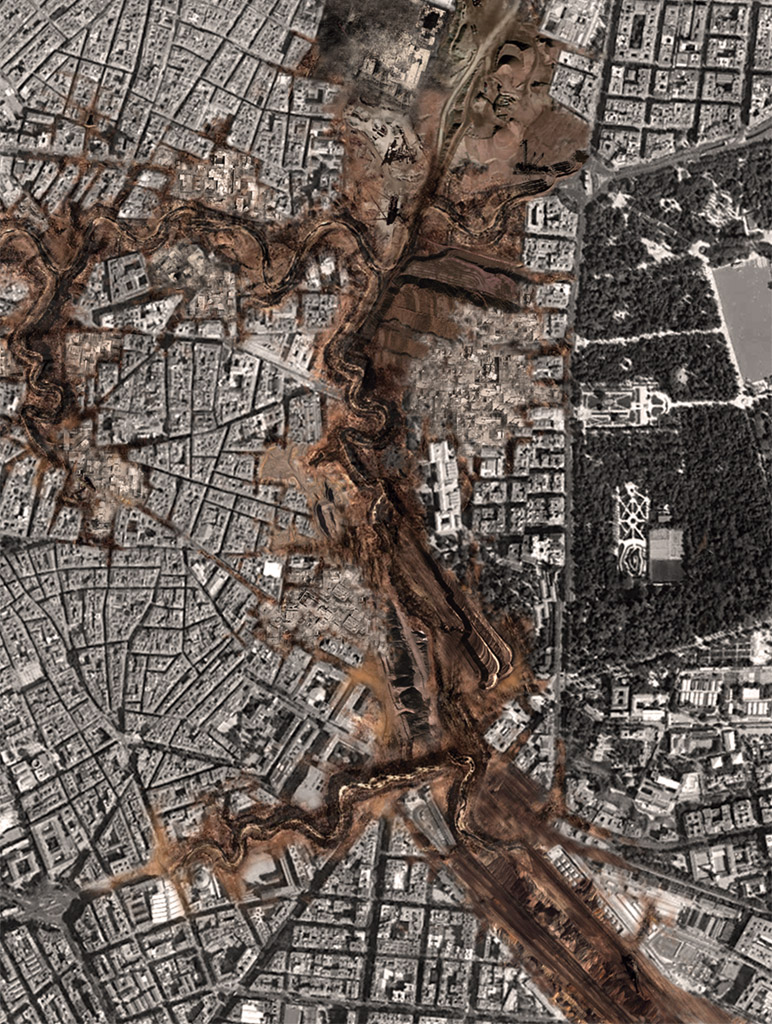 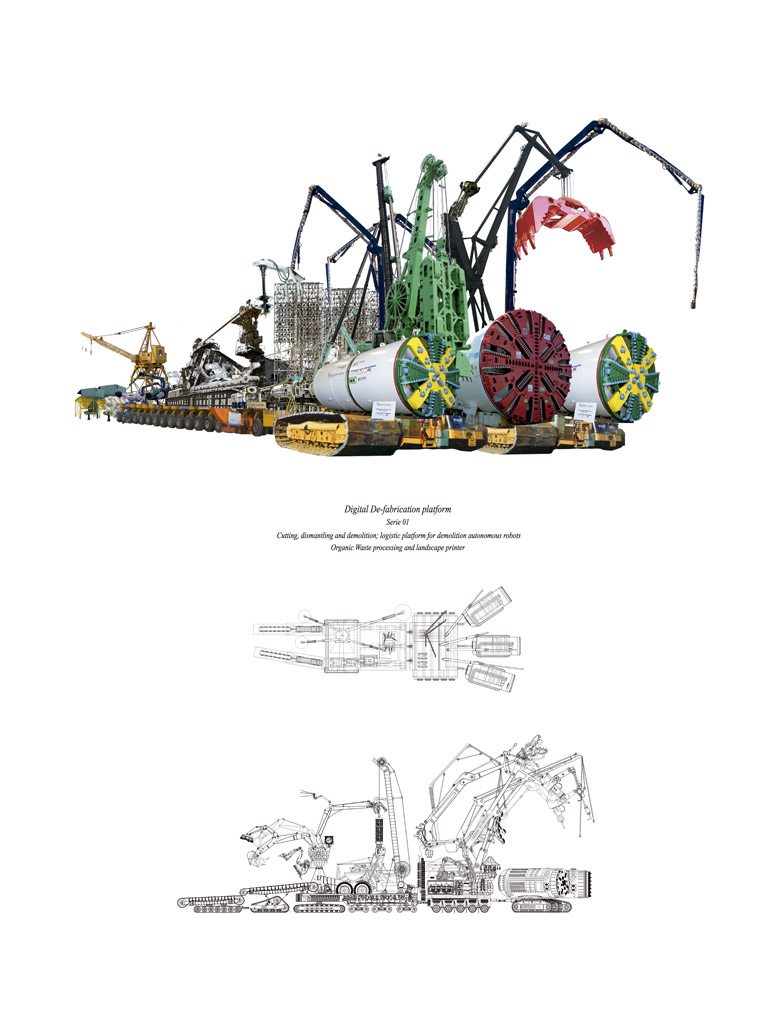 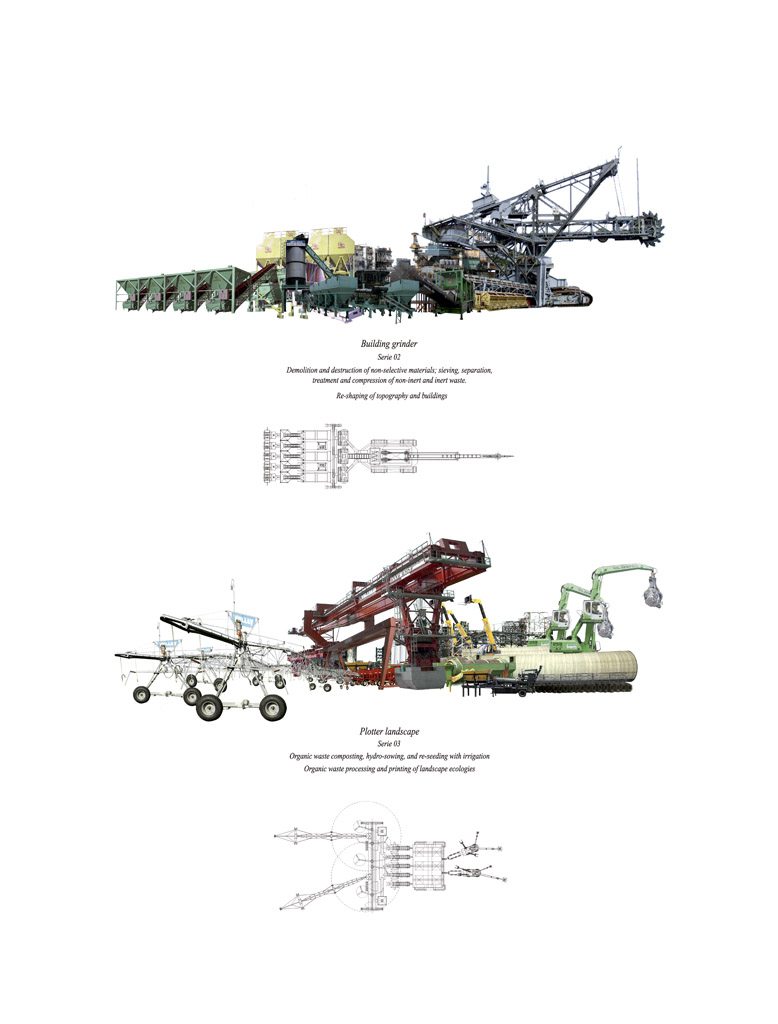 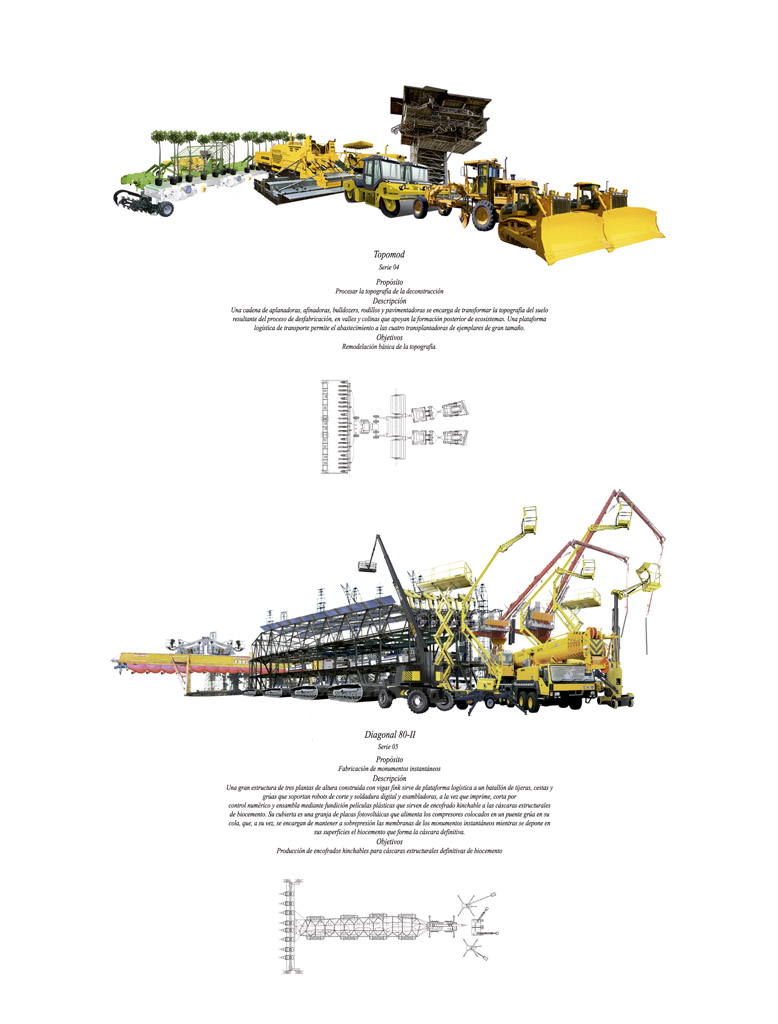 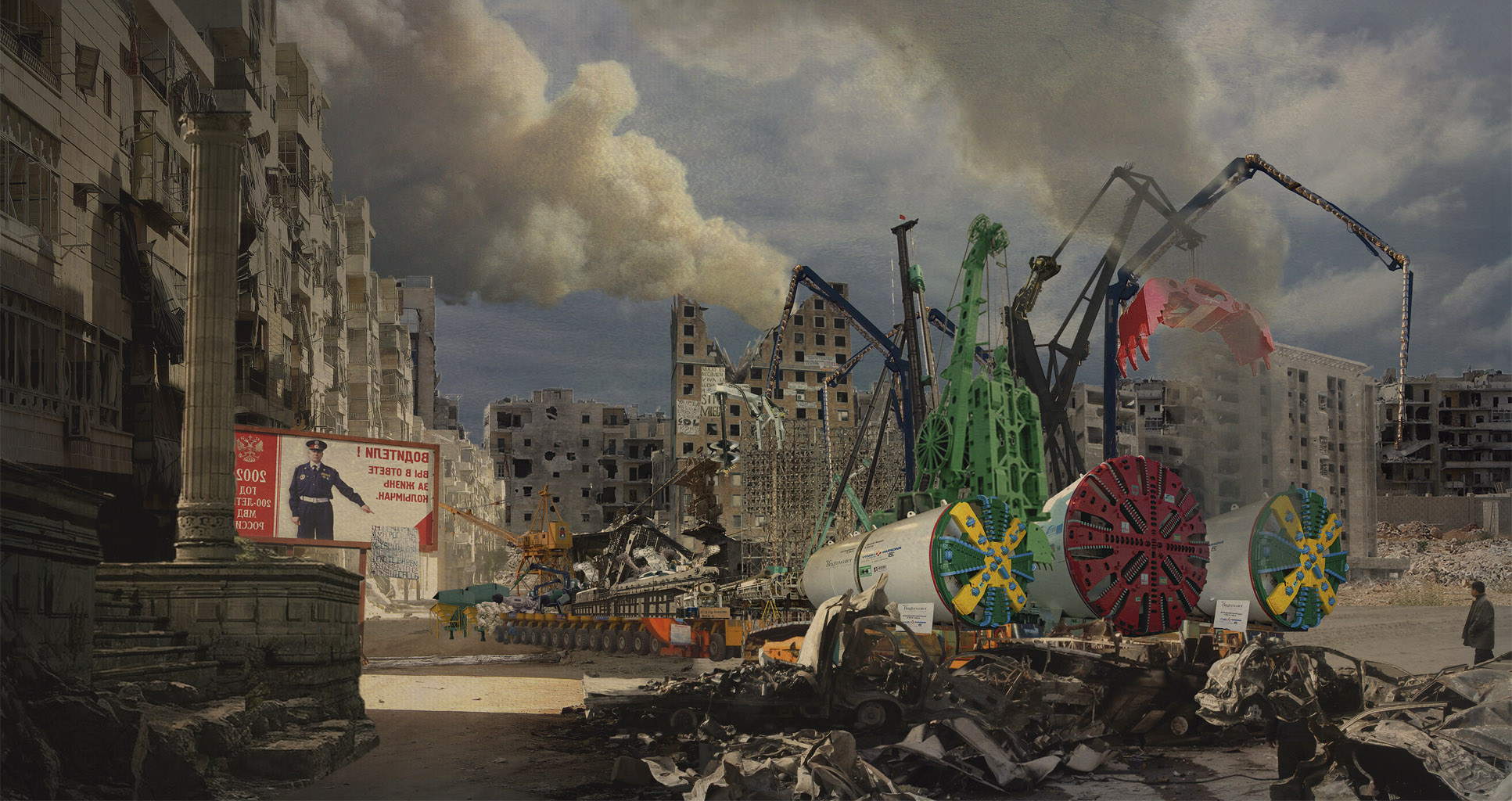 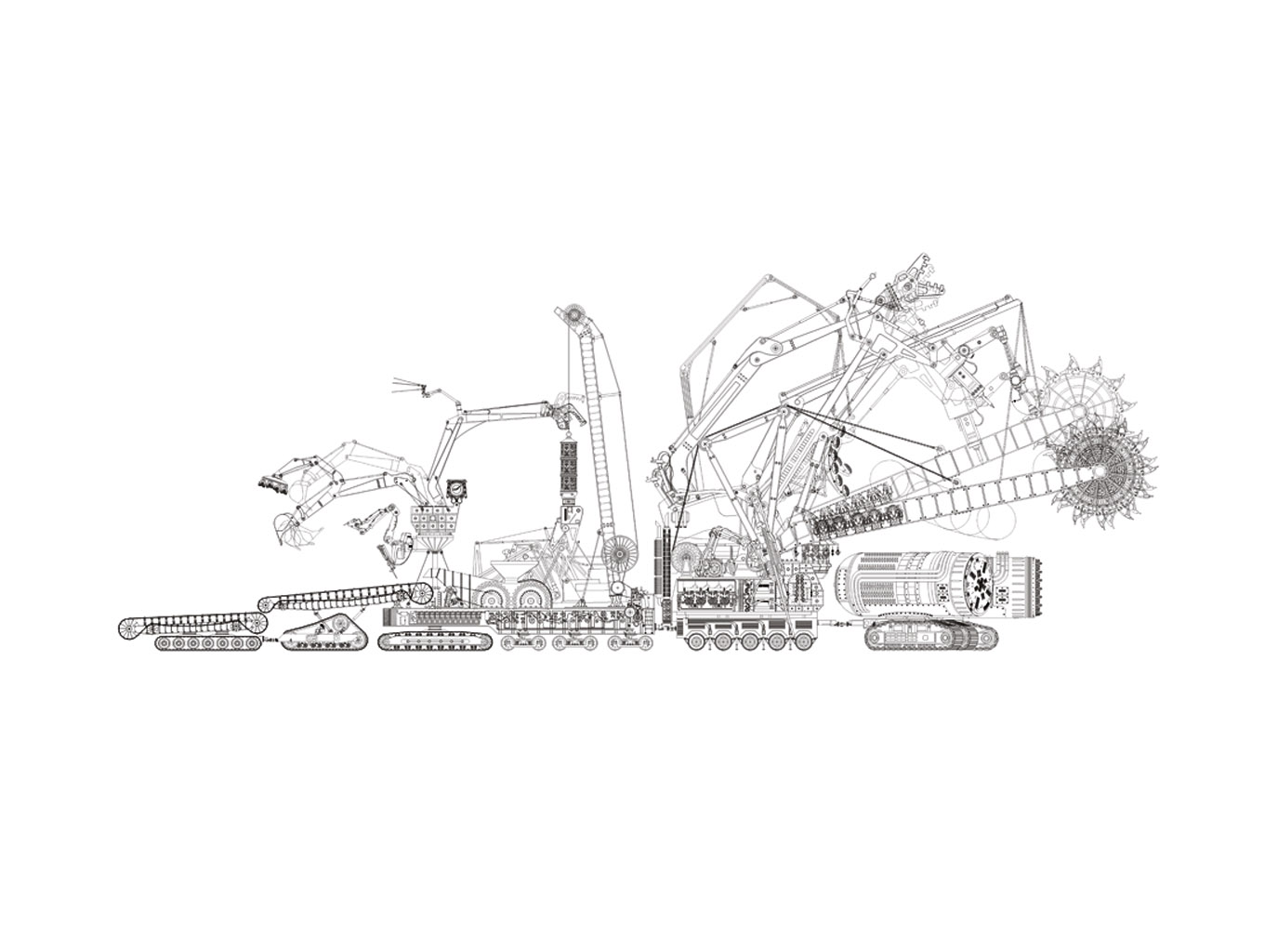 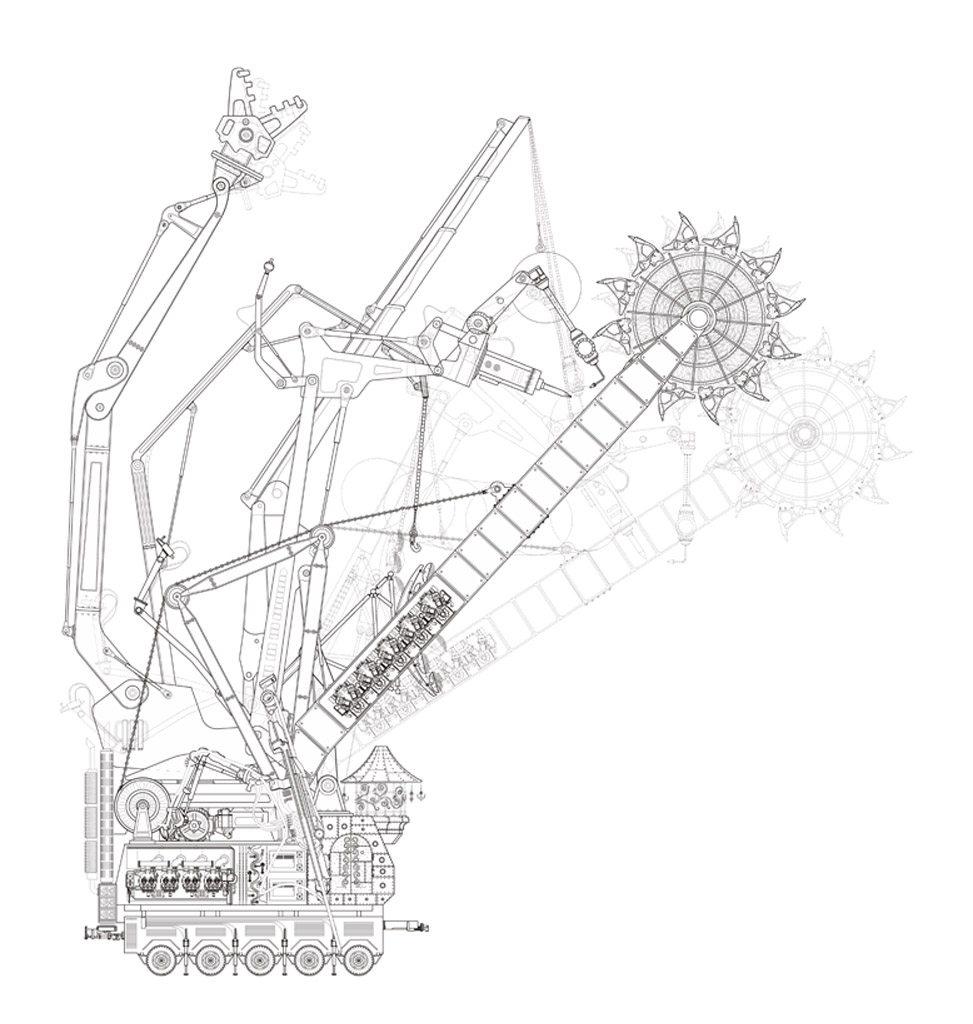