Compostilla power station, in Ponferrada, is to be converted into the National Energy Museum. The difficulty in creating such a museum begins with the lack of definition of the subject – energy – usually associated with an intangible sort of matter. But here too there is no real collection and the only interesting physical vestige – the machinery – has been dismantled. All that remains are two huge, crudely constructed pavilions: two empty giants condemned to be flooded with the umpteenth version of what our cultural managers call ‘content’. Our proposal uses these giants as a starting point for a debate about different models of energy production, management and consumption. The new institution is defined by a confrontation between two different classes of technological objects: the massive, hypertrophied power-generating machinery and the use of thermodynamics to unify the spatial organisation and construct the interiors. While one favours a centralised model of mass production of energy, spatially akin to the idea of limited natural resources and dispersed consumption via large-scale distribution lines, the other proposes an antagonism that follows a simultaneous, collective model for producing energy locally by a series of smaller and numerous devices. Instead of striving for a seductive appearance, then, the central museum piece concentrates on the way energy is handled.
The new extension is divided into vertically superimposed rooms – each associated with an intermediate climate production chamber – interconnected by a system of lifts, stairs and ramps on the east and north sides. The primary space is an immense atrium – essentially a greenhouse – that draws in pre-treated air from the distribution galleries and the large subterranean halls of the old power station. The resulting air pools work together with the thermal inertia of the floor and the reinforced concrete walls to regulate the inside temperature. The roof of the atrium is shaped to accelerate the air rising from the underground galleries. The solid volume is then eroded virtually by upwelling flows – produced here by air instead of water – generating an inverted geology that feeds the air into the large lateral apertures and the various intermediate chambers on each floor. The interior domes act as massive chimneys, their pressure difference triggering kinetic suction. Wrapping around the prismatic volume of the exhibition rooms is a black inflatable jacket – a thermal blanket that serves to pre-treat and heat the air, which is then mixed in the intermediate chambers. This second greenhouse reflects the position of the interior domes in the geometric pattern generated by the necessary fragmentation of the surface. 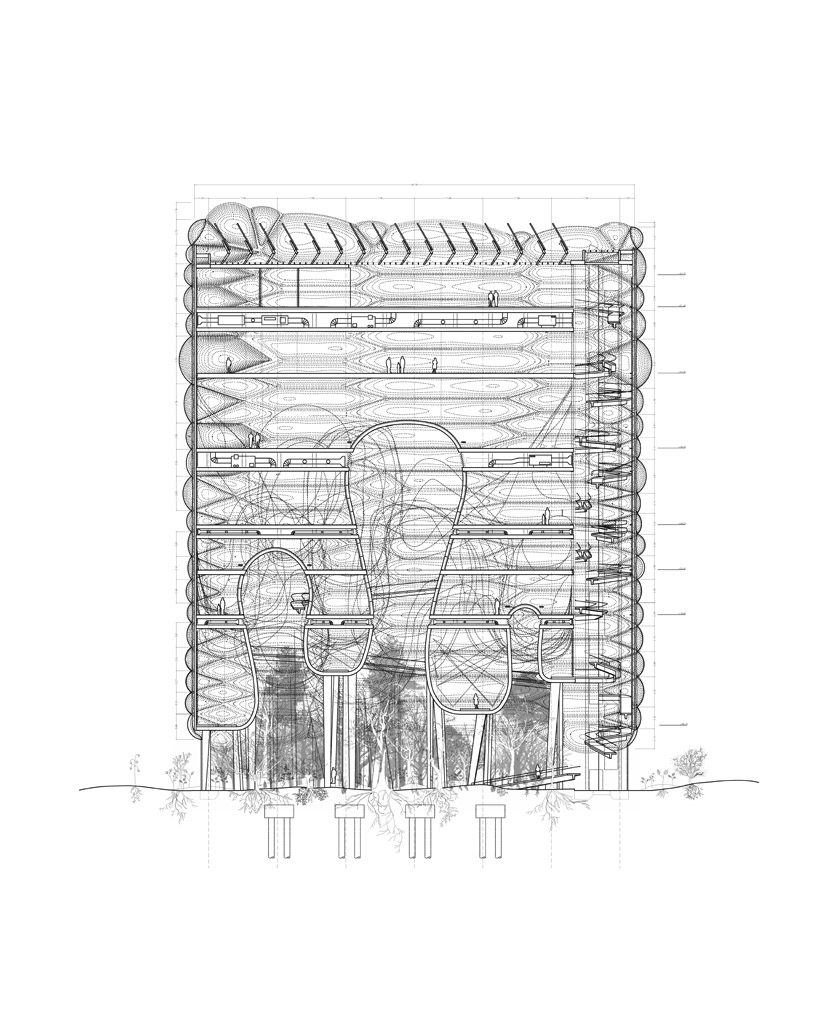 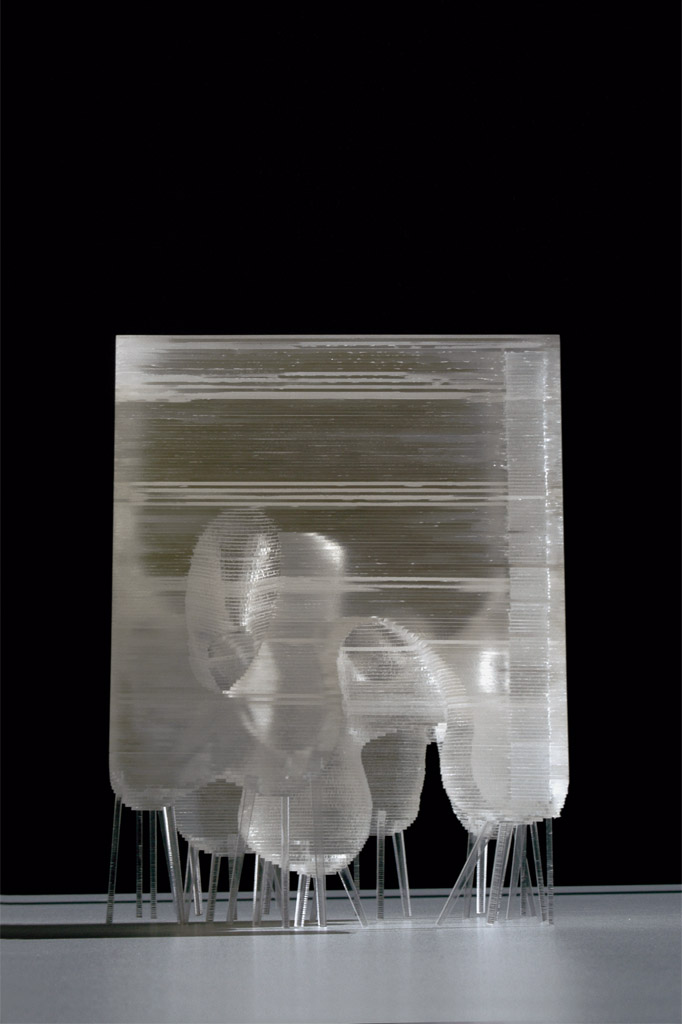 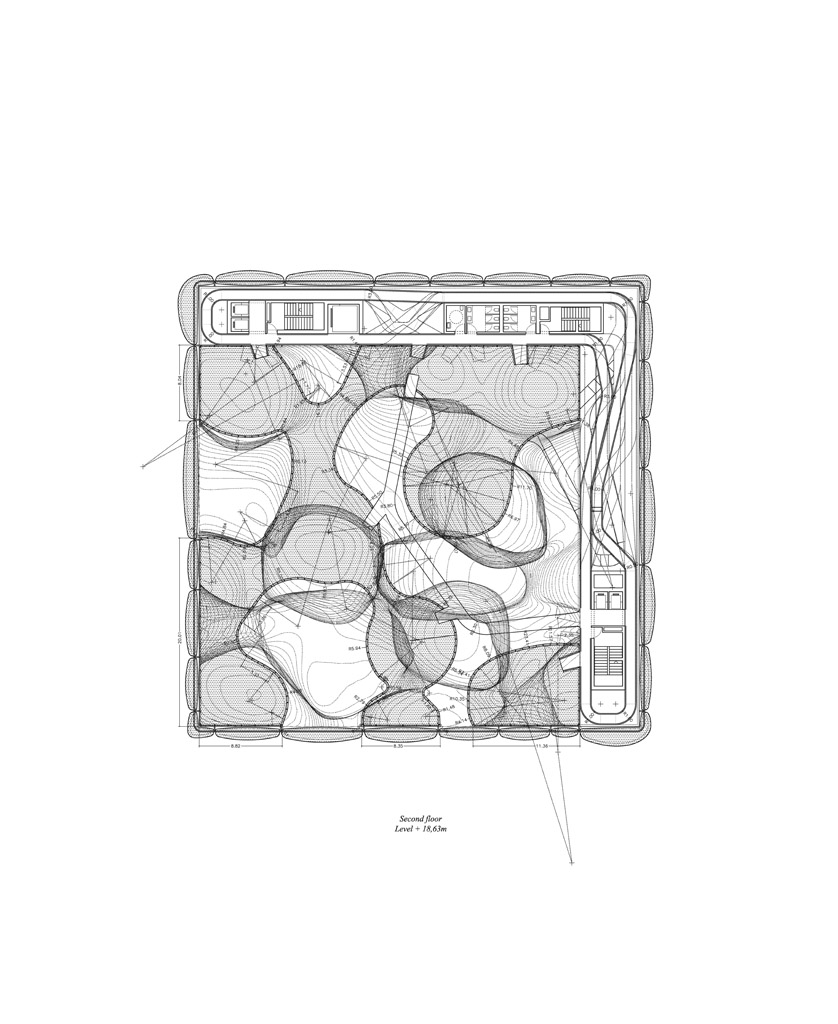 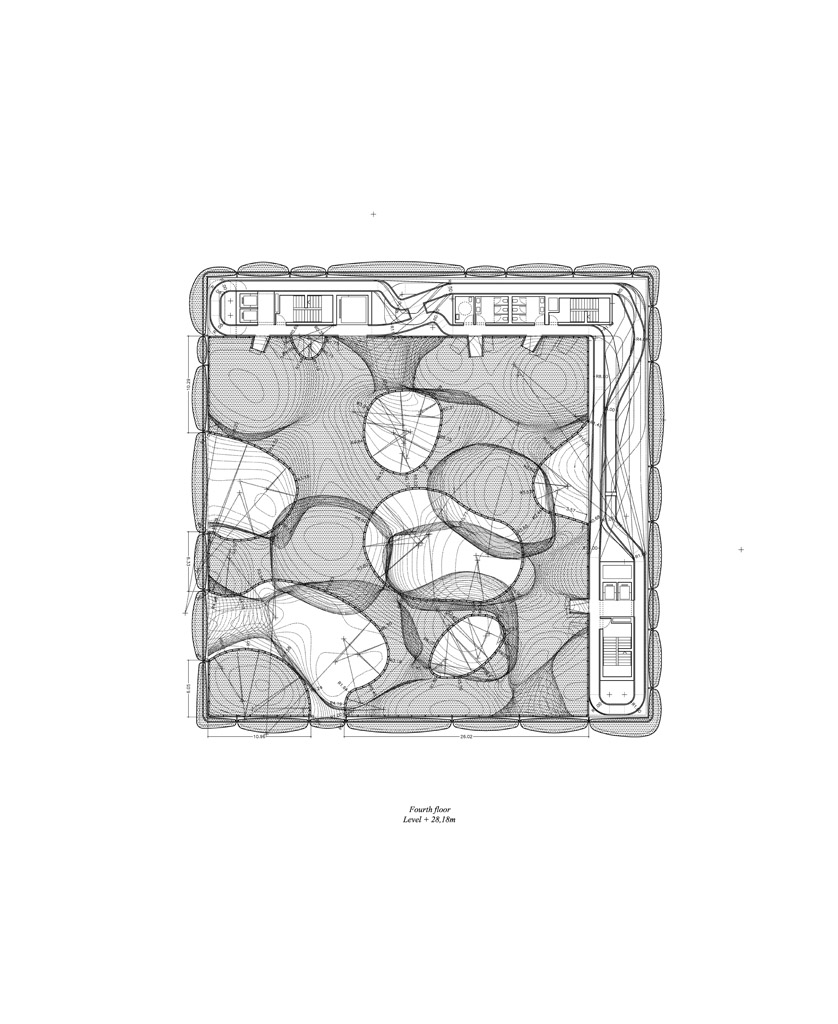 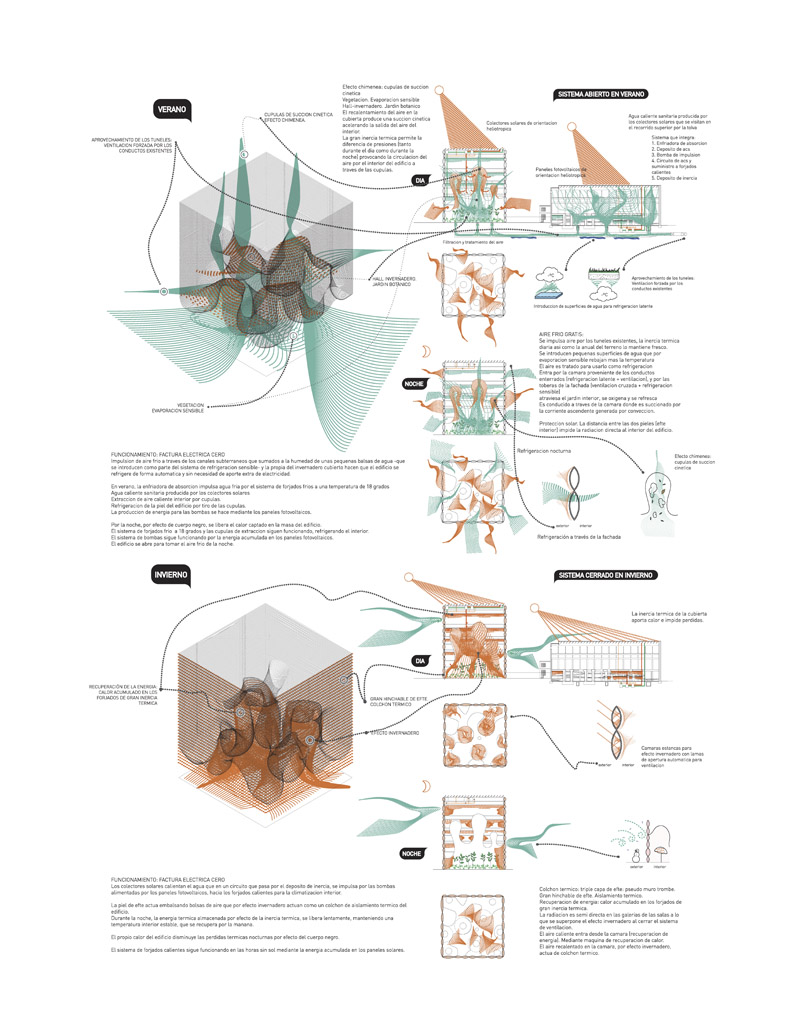 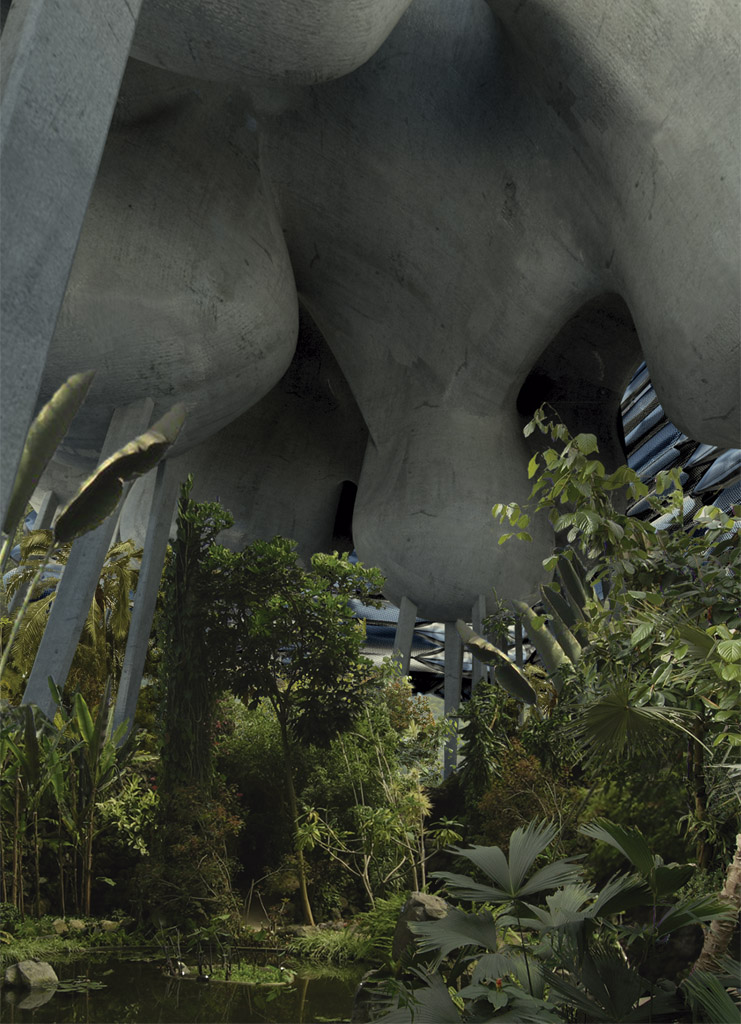 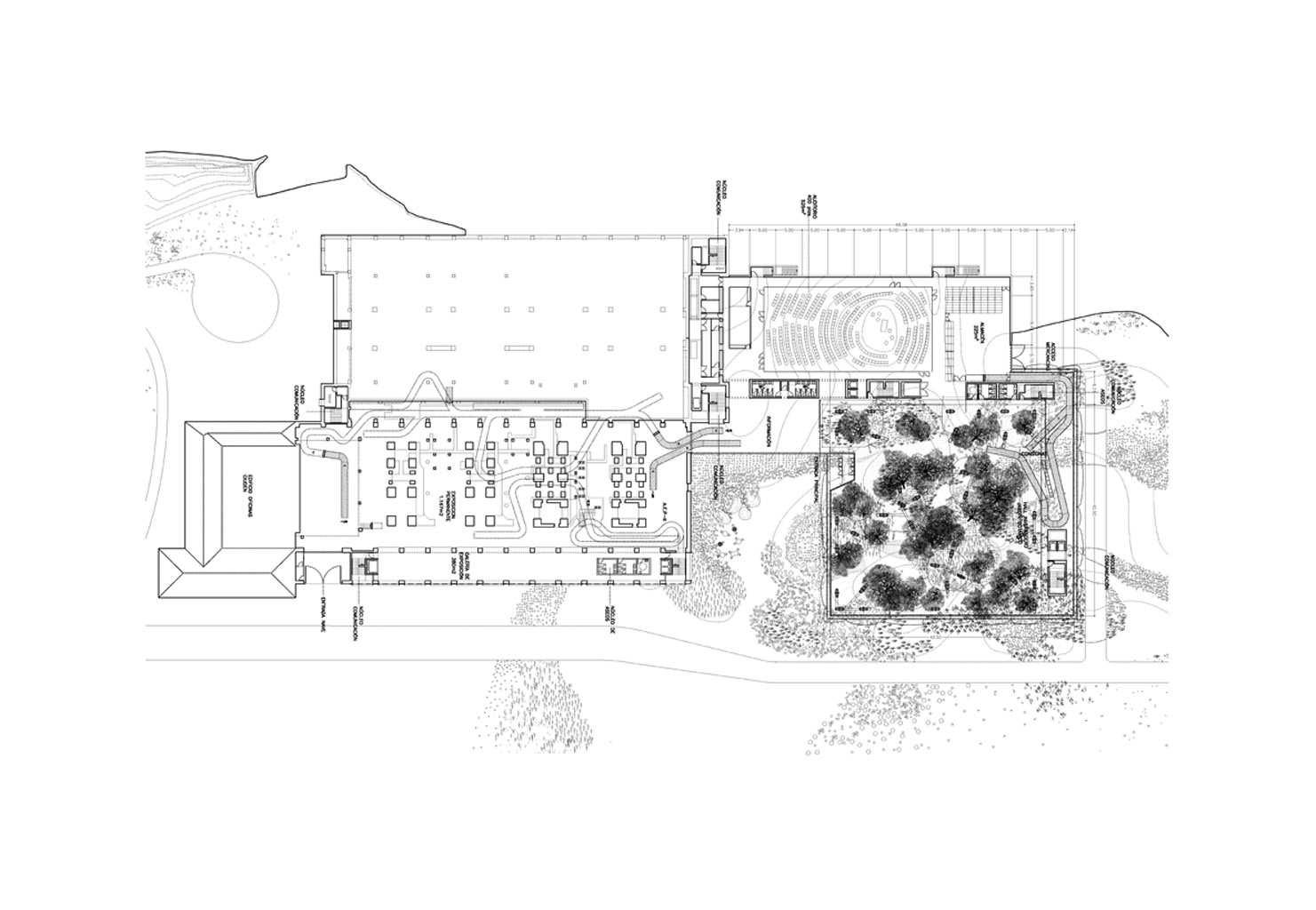 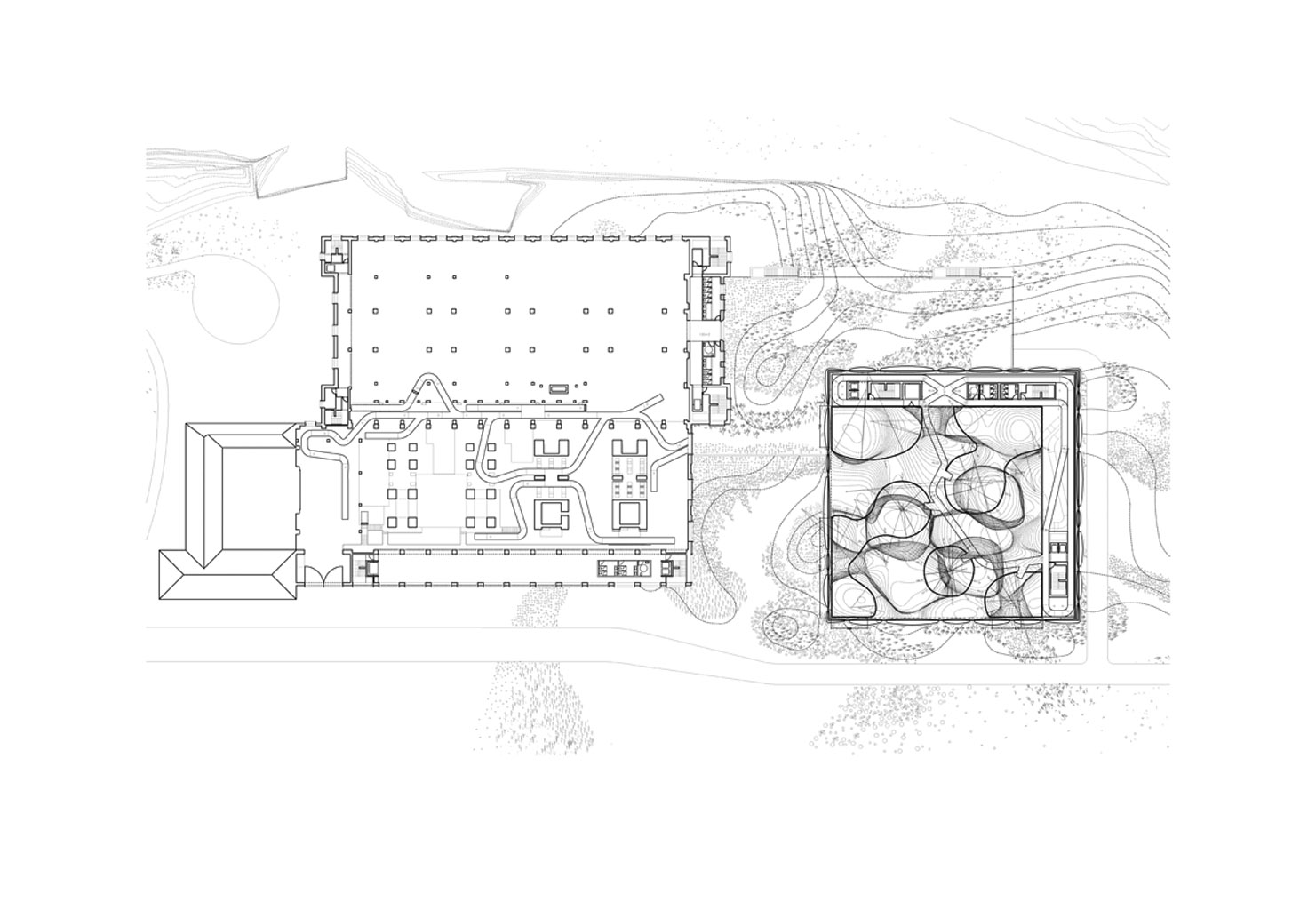 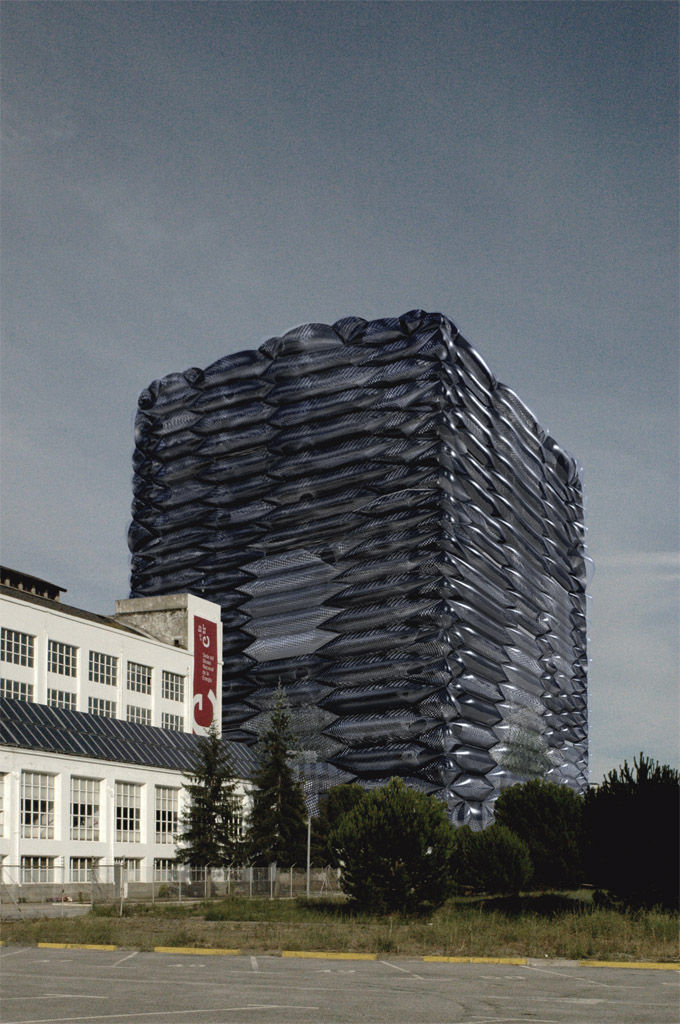