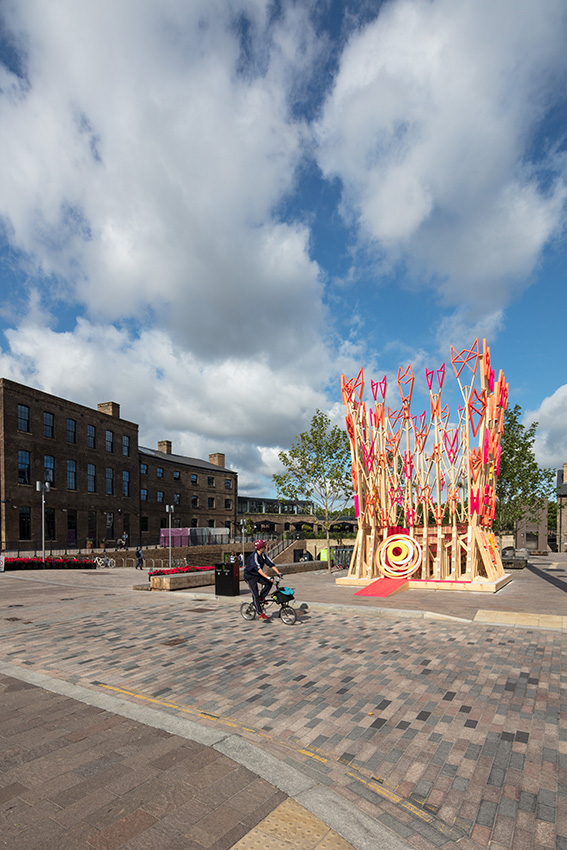 The Wooden Parliament. A Non-communicative Language of Signs
(2018-2019)

The Wooden Parliament is a temporary wood pavilion sponsored by Finsa, that is travelling through Europe. The idea is to engage in a different way with the tradition of pavilions, transforming their purpose-less nature, meant to just pleasure the eye, turning it into a real public artefact, as a human construct, a physical device that induces, shapes and modifies the nature and purpose of human physical interactions, displacing a private interior to the public realm. We proposed the construction of a parliament using the materials suitable to be outdoors produced by Finsa, on the one hand as an assembly of material pieces of given dimensions, that being together construct a stronger whole to play with and on the other hand as a micro-parliament, an immersive room wrapped with an ornamented dress that changes depending on the events. The wooden Parliament is an immersive crater, an interiorized space open to the sky with a three-dimensional tundish shape, following the spatial configuration of a centred theatre without neither stage nor conductor and highlighted with saturated colour, to shelter discussions and conversations among a small group of people.
We selected Compacmel panels for the seats and maritime pine saw timber (madera aserrada de pino) for the structure, measuring 23 by 100 mm or 200 mm, with a total maximum length of 2500 mm. To avoid the buckling of such thin pieces we combined them interlocking one another, in the tradition of modest timber constructions. There are nine vertical frames that on the one hand construct the tundish shape of the auditorium and on the other hand, hold the colourful pieces that construct its image by means of continuing and elongating the central slat of the frame. To resist lateral forces (wind pressure mainly) these pieces are joined by a series of diagonal elements to from the upper perforated planes avoiding the construction of complex and expensive joints.
The boundary between the open interior and the city is defined by the seats, the supporting wooden vertical elements and a series of abstract signs. This three-dimensional boundary is partially coated in colours and partially varying depending on its location and the events taking place, in a series of different dresses. For its stay in London, a series of blown up wooden knots are converted into abstract signs that cover the pavilion following the precise geometry of the wooden structure. This alphabet of signs with no meaning, follows the tradition of ornaments along history derived from constructive and structural elements and geometries deprived from its initial role. Something similar to the so called process of petrification from the wooden construction to stone in Greek temples, so didactically explained by August Choisy, in which the geometry and the assembly principles of timber construction, is then transformed into the basic elements of the classical Greek architecture, forming a vocabulary of elements with a clear syntaxis disconnected from the actual construction system.
We explored the possibility of an ornamentation program that could follow the principles of articulation of timber construction but deprived of any meaning, a non-communicative language of signs, similar to the so called cryptic or magical languages, whose signs seem to have an occult meaning to be deciphered, but in fact absolutely deprived from any associated meaning. Three big disks that follow the rules stablished by Max Bill in his 16 Variations on a Single Subject, play an important role for the pavilion: a rotating door that is closed at night, a disk with hanging booklets containing short texts that describe fantastic spaces and places and finally a lighting disc as a miniature moon.
From the exercise of using a limited number of wooden pieces, whose dimensions were fixed, we assembled a public artefact, to host conversations and discussions in a sort of a micro-parliament, whose public condition is highlighted with a non-communcative language of sings that follows the articulation rules of the tectonic principles of its particular timber construction.
The wooden parliament was installed in King’s Cross during the London Festival of Architecture in 2019, then it went to Birkenhead Park, Wirrall, very close to Liverpool, and after that to the Barcelona Design Week in June 2020. 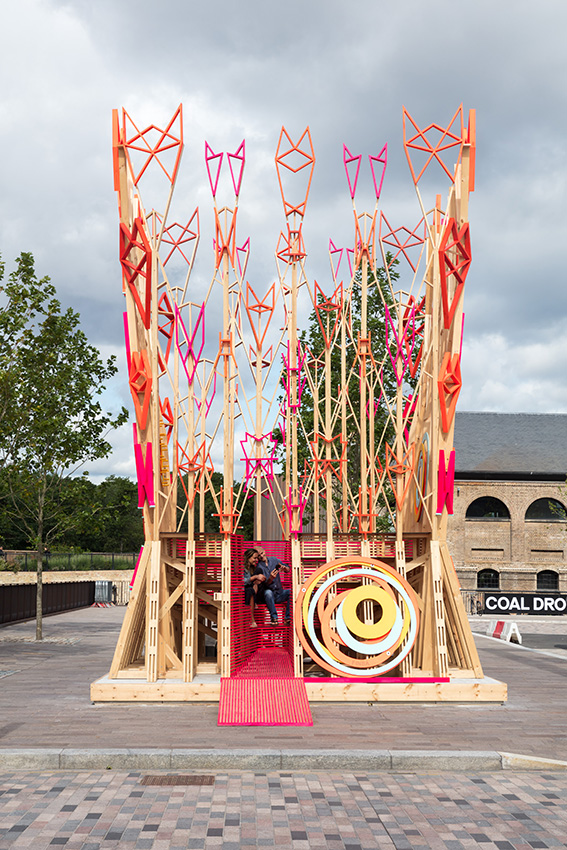 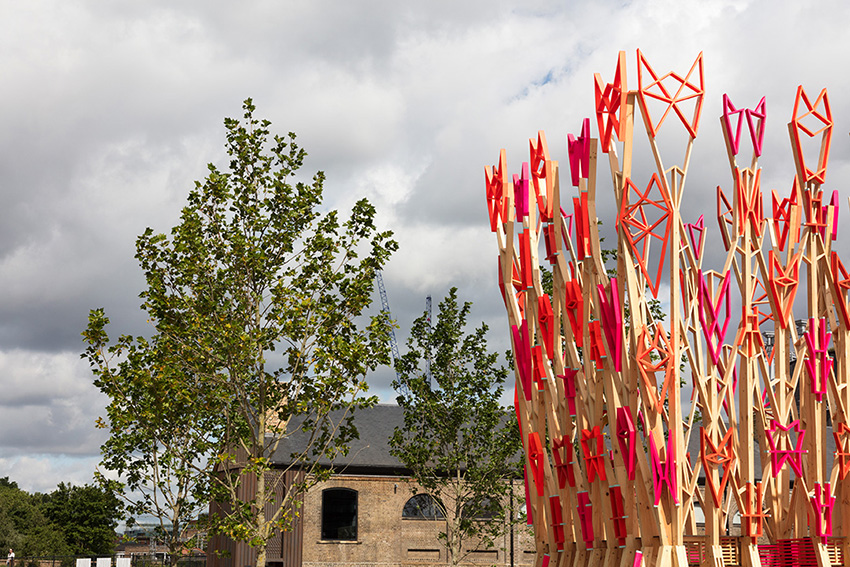 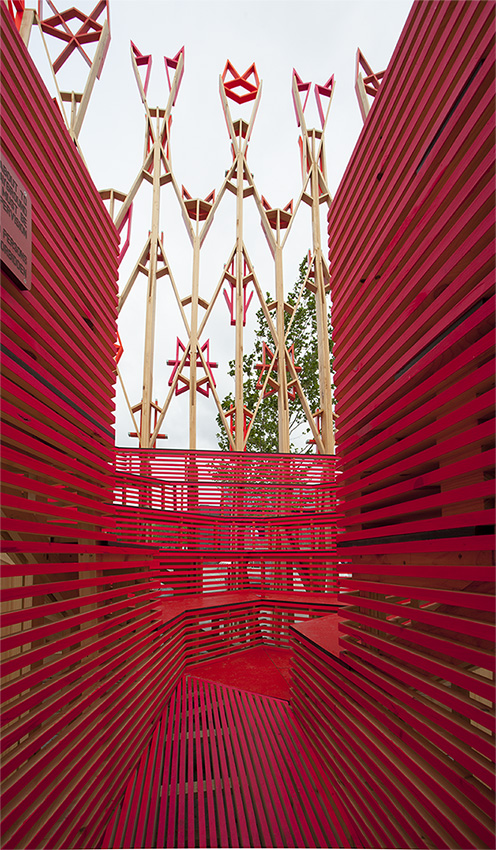 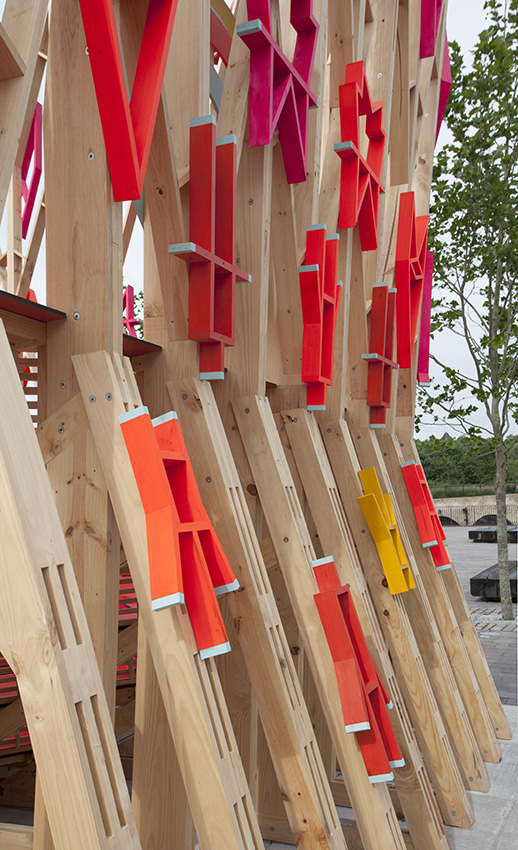 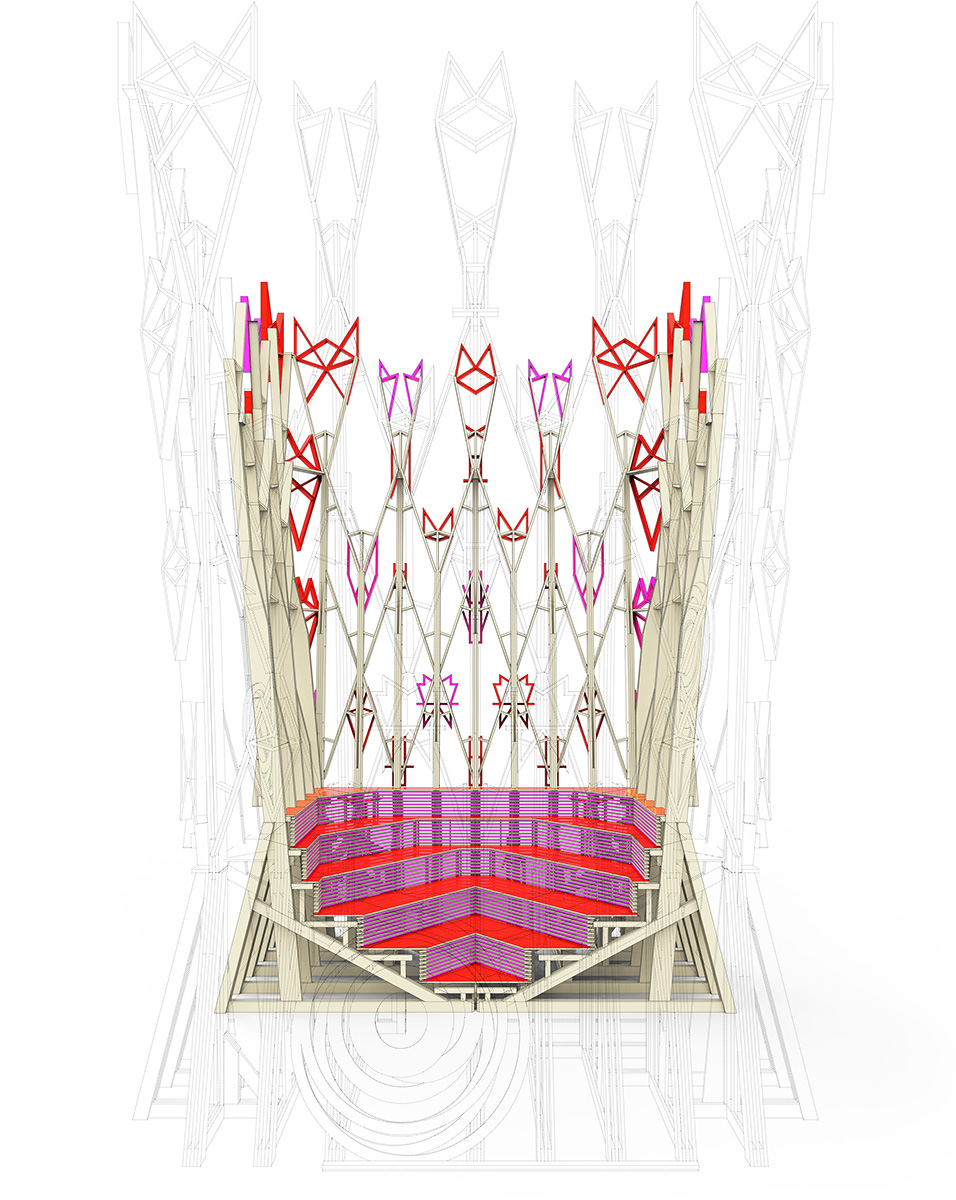 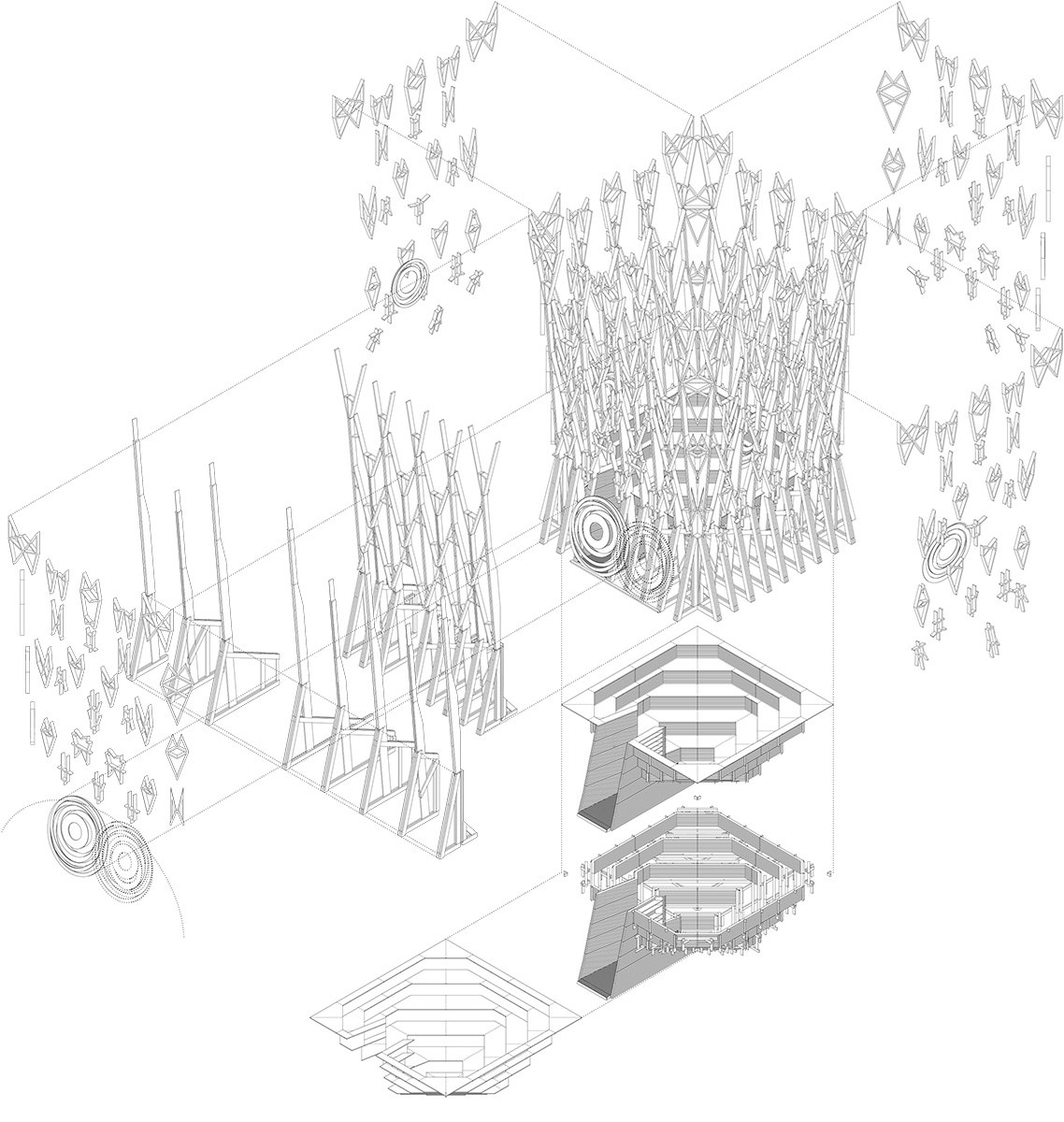 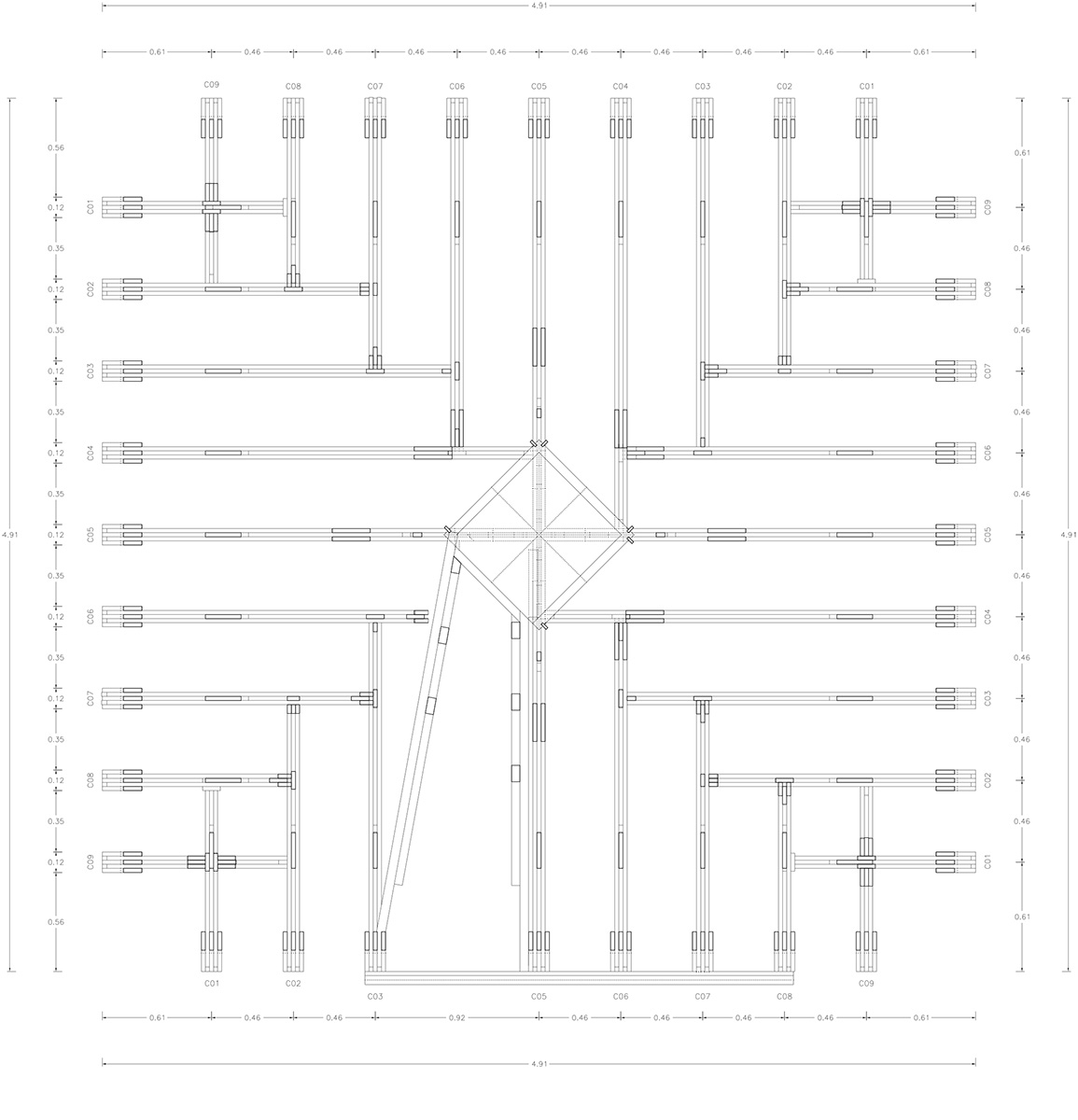 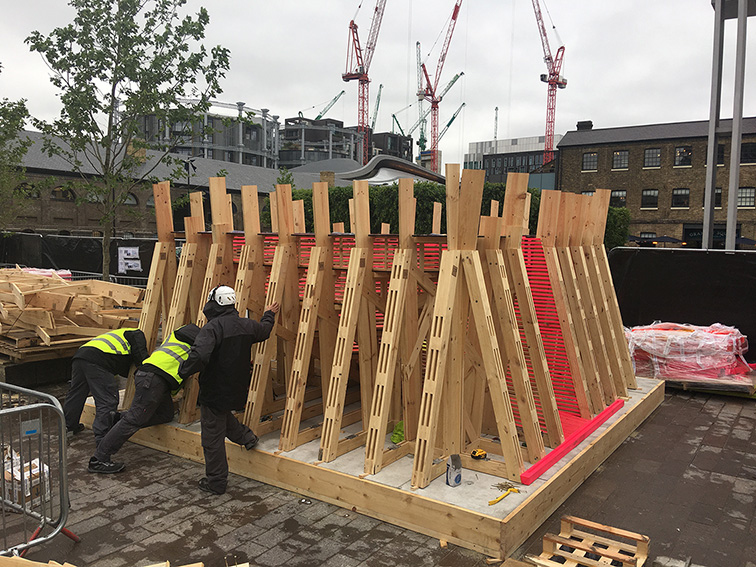 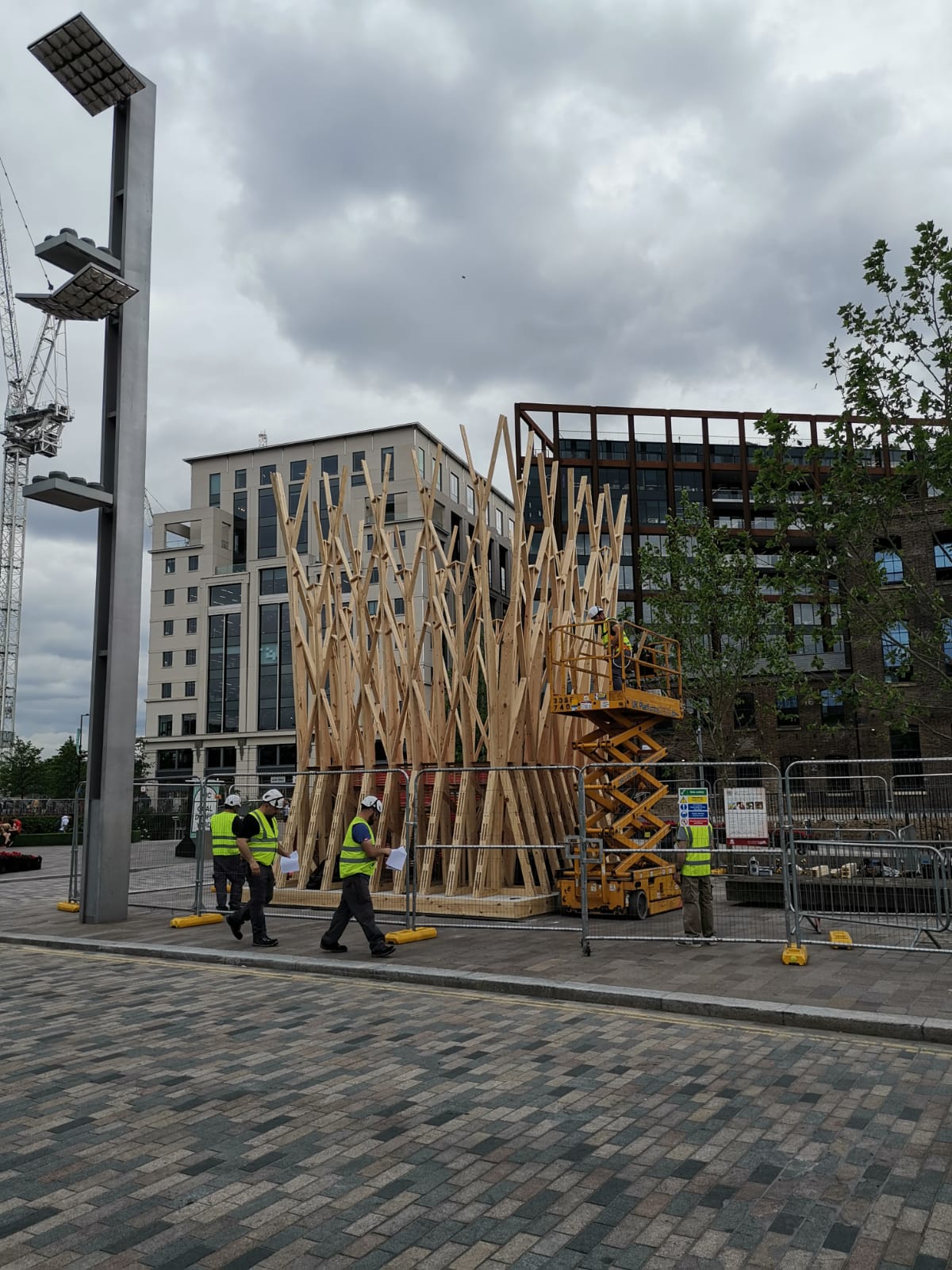 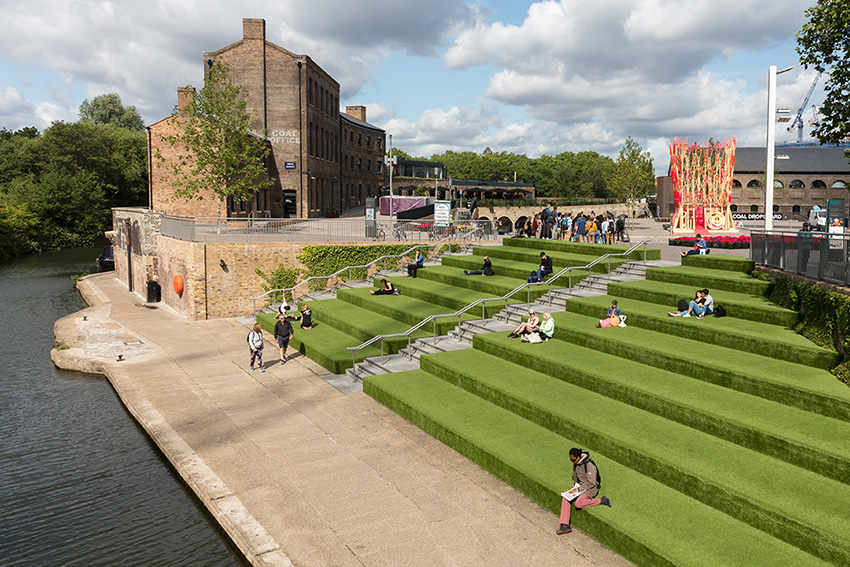