Sir James Hall in his Essay on the Origin, History and Principles of Gothic Architecture, published in 1813, discussed the origin of the Gothic on vegetable constructions upon a set of marvelous drawings and real scale mock ups carried out with flexible ash rods bent and knotted to form all of its elements, from the fascicular multi-lobed plant columns, to the windows decoration, the shape of the arches and vaults and their continuity with columns. Gorgeous and delirious drawings, which sought a clear parallel with the translation to stone of the wooden constructions of classical Greek architecture, in an attempt to establish the Gothic as a genuinely English style, served us to find the way to answer the commission of constructing a pavilion for visitors, which aimed to introduce cuisine and architecture in the environment of the 11th Sharjah Art Biennial. Designed to be installed in an open space of the network of alleys, squares and courtyards of Al Maraija area, it was meant to protect from the sun during the benevolent winter of the Persian Gulf and serving as a refectory in which readings and conversations will accompany the tasting of food as a point of pause to the density of information of the Biennale.
The dome that covers this reinterpretation of the traditional diwāniyyah and majlis is formed by five sets of six bundles, previously bleached, that are duplicated, intertwined and joined two by two. Each of the arches is a linear element of areesh, a vernacular technique of construction from the Emirates and Gulf countries, proposed to be used for the first time in this way. The areesh is prepared on the ground by joining with ropes at regular intervals a sheaf or fascicle of palm leaf, previously peeled and soaked in a special solution, distributed in such a way that the beginnings and ends do not coincide. In this bleached palm diwāniyyah, the fascicles are built with precise lengths to generate the form and placed in a longitudinal trench filled with mortar in order to avoid the horizontal movement of the arches. In the top of the dome six double arches are trifurcated and intertwined with the other five sets of arches, to gain rigidity without increasing the thickness of the structure. This interlaced, designed to evenly distribute the efforts on the surface of the membrane brings back the journey to the East of the crossed arches dome of Villaviciosa chapel from the Cordoba mosque.
The result of this is an open-white basket which filters sunlight and allows the breeze from the nearby creek to cool the conversations and debates about the state of Art happening around the tables, covered by intersected patterns of light and shadow projected by the areesh enclosure, coming back to what the origin of the city was once, a maze of open and covered courtyards formed by palm leaves just stuck in the sand. 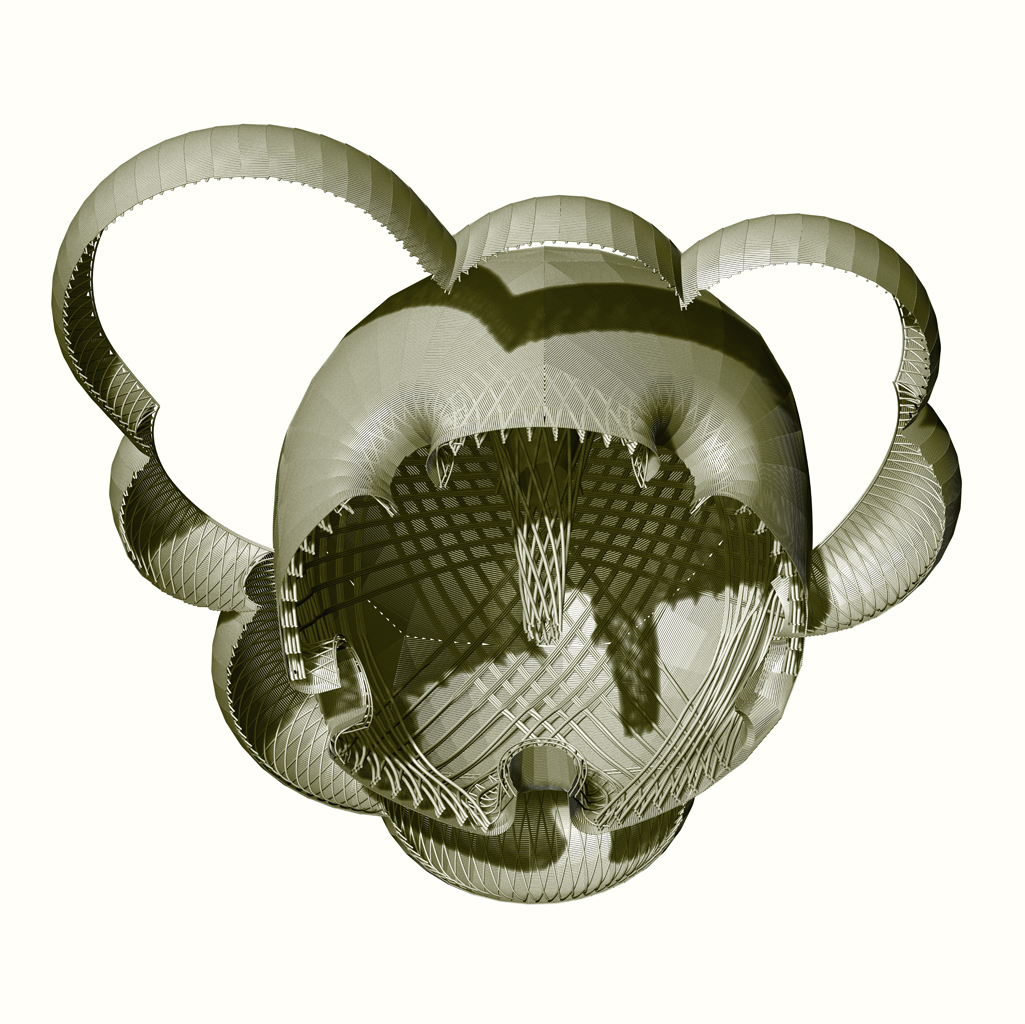 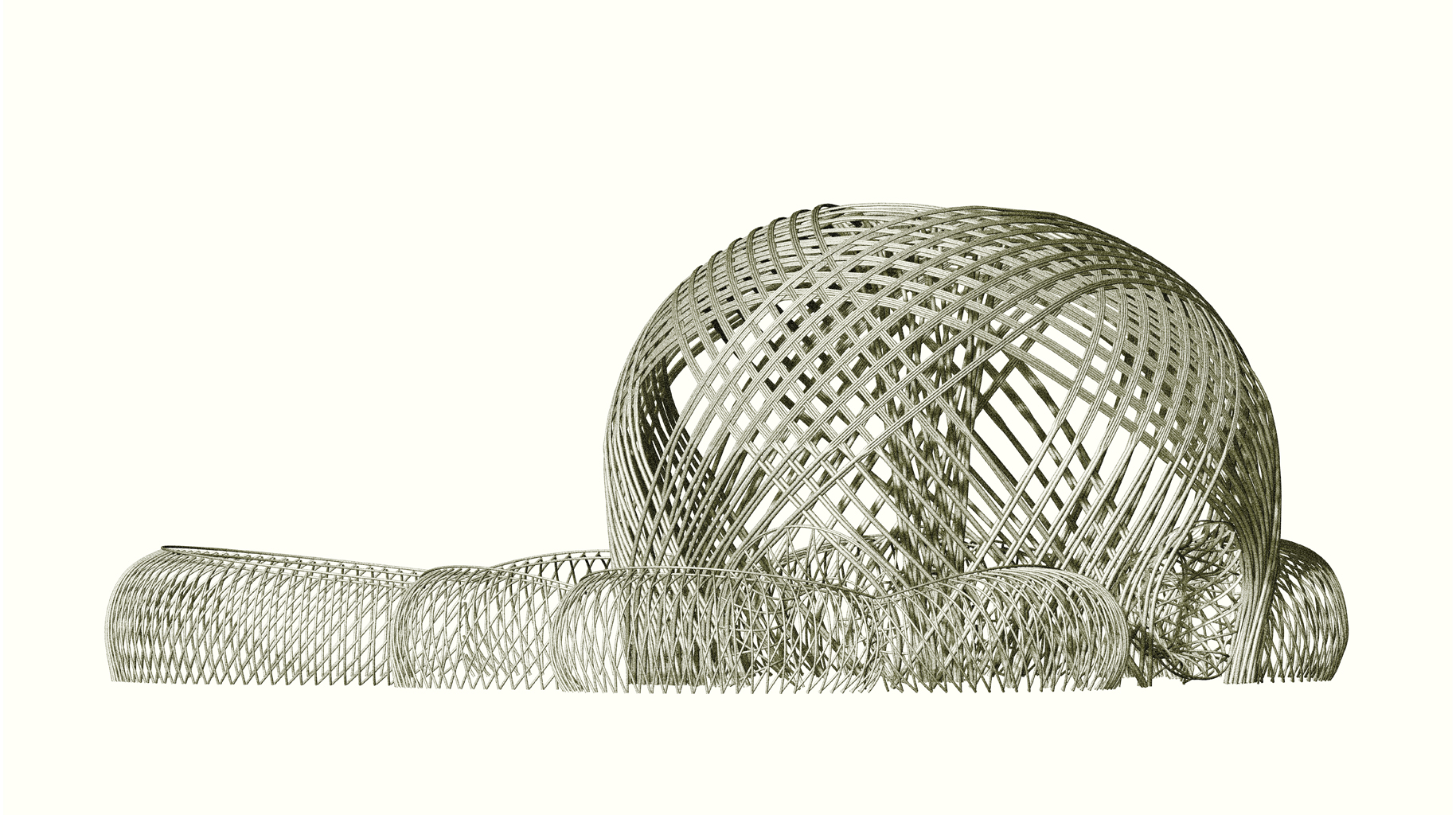 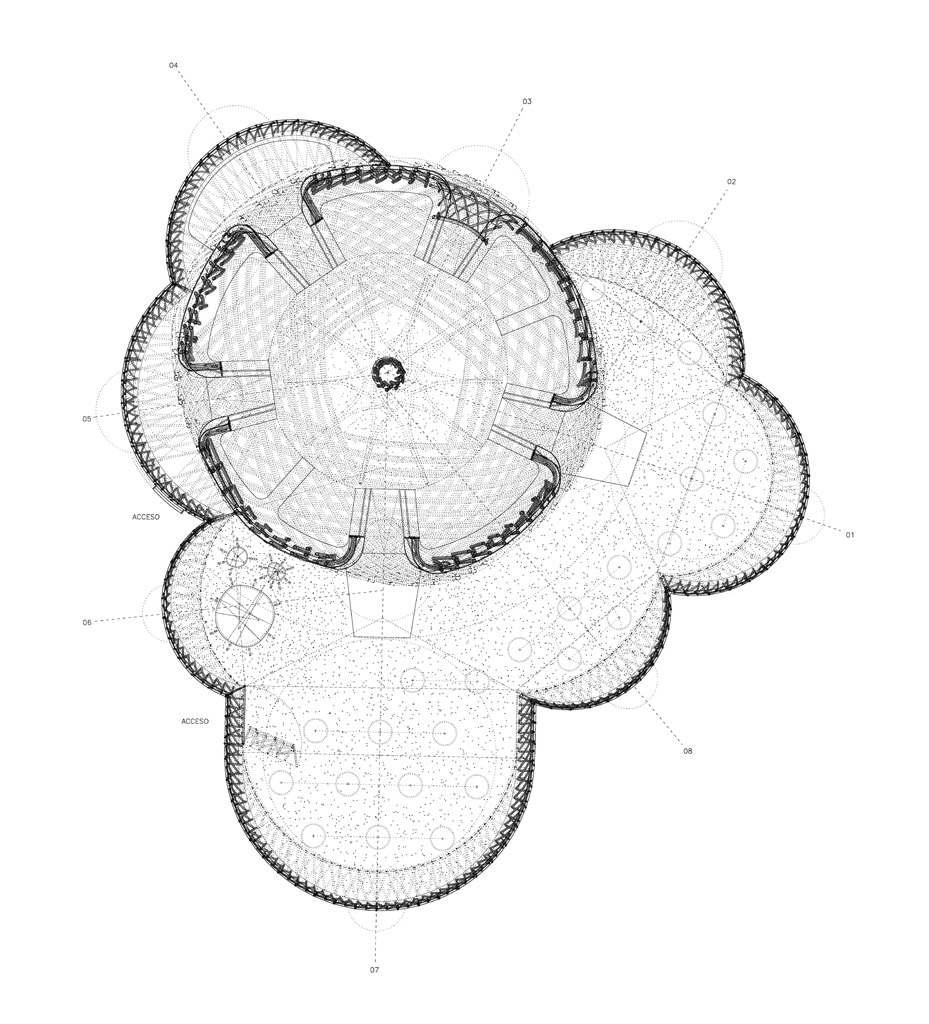 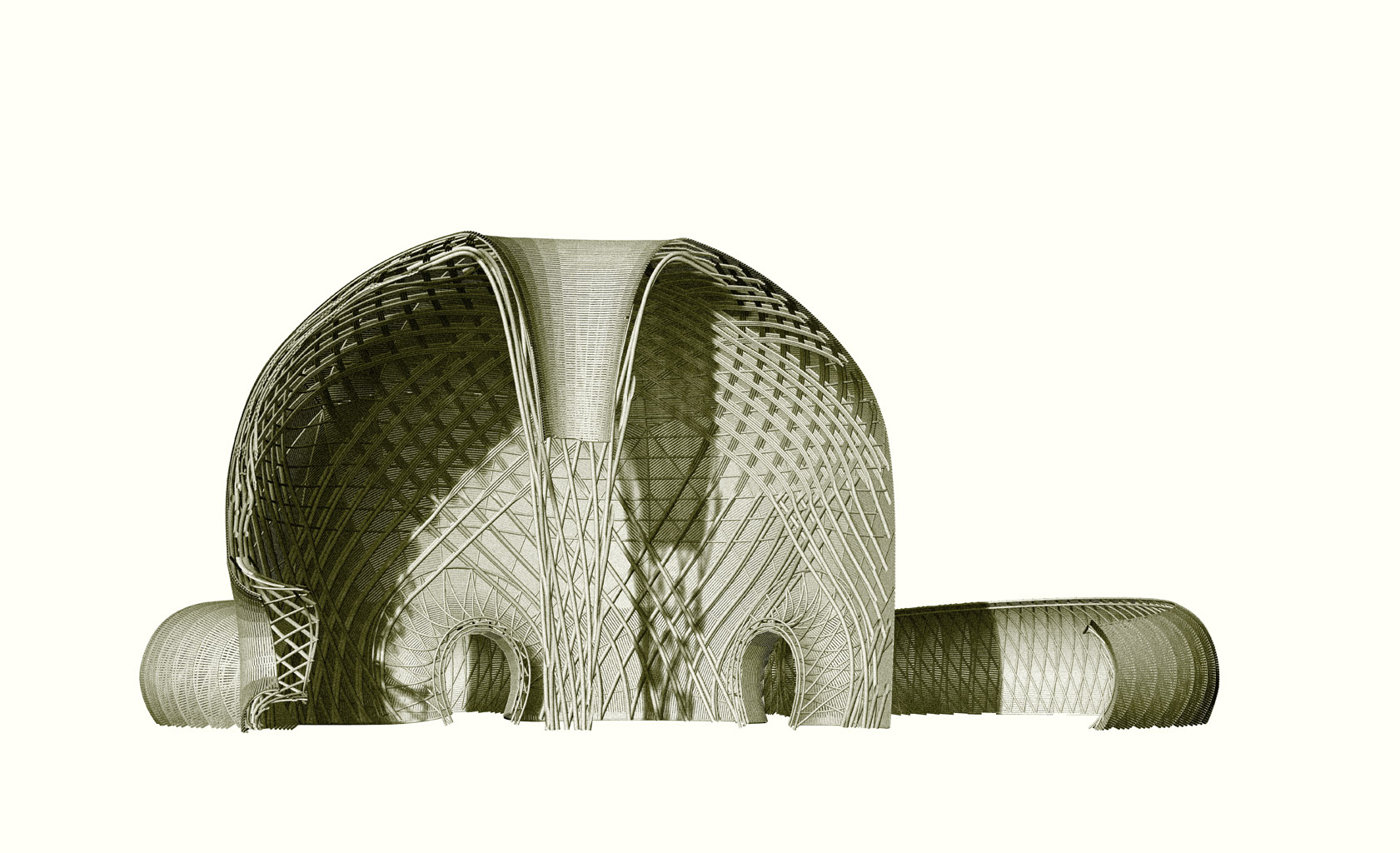 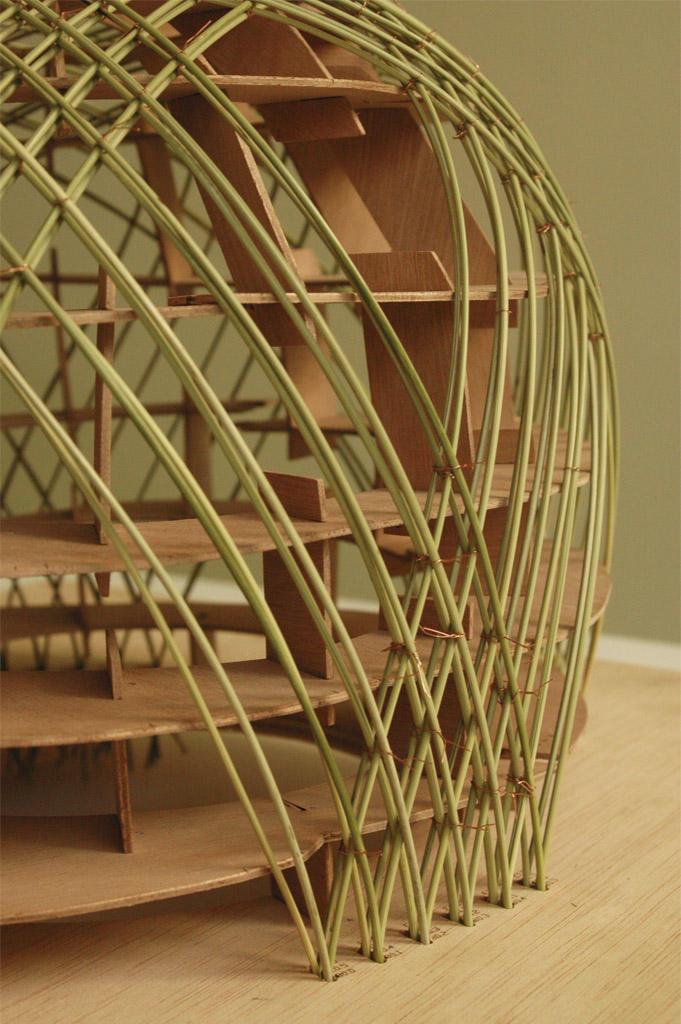 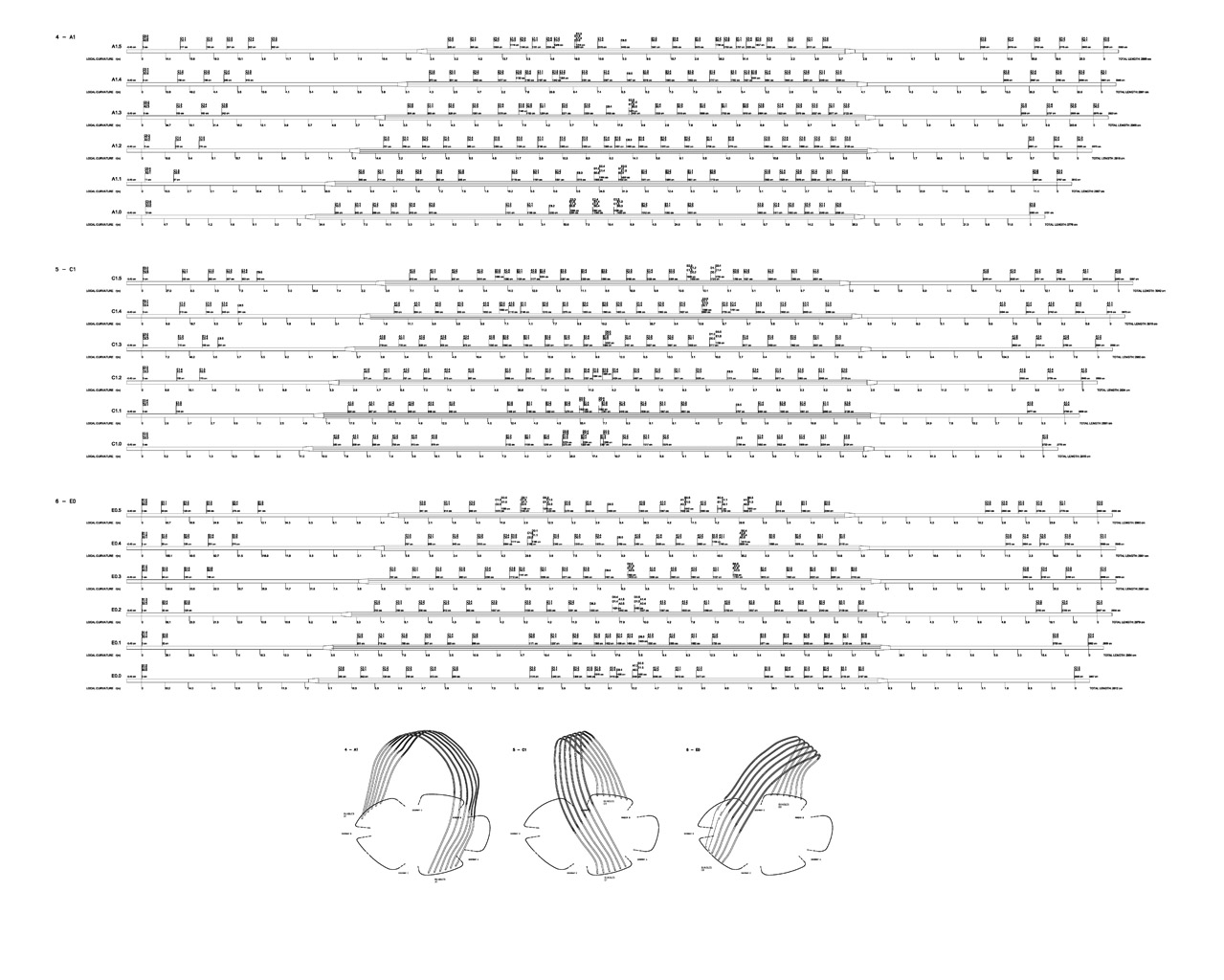