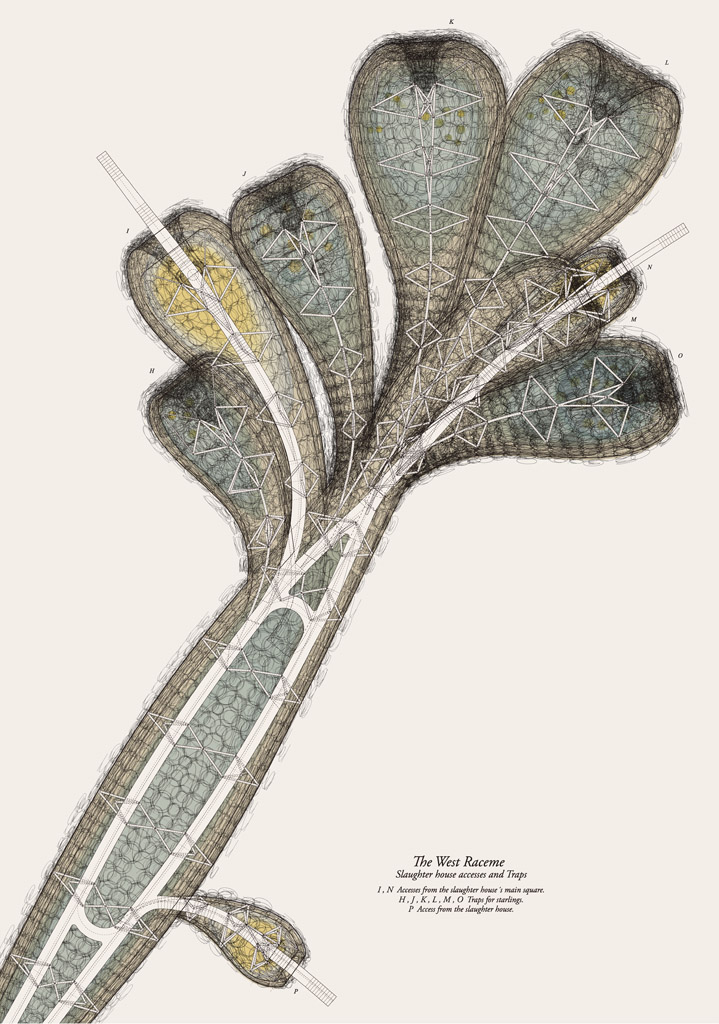 The relationship between humans and animals is based on power, and almost always animals have been the relatively powerless and marginalised ‘other’. The voicelessness of the individual animal enables those in power to manipulate, exploit, displace, consume, waste and torture with impunity. Many animals have their own ‘territories’,specific environments to which they have adapted, but what happens when they are forced to comply with the human spatial ordering? Although some orders are created exclusively for human–animal interaction, most involve the rigid caging or fixing of animals in a given area (the zoo, the farm, the slaughterhouse). Only a few animals have the capacity to transgress the imagined and materially constructed spatial orderings of human societies, and then only in a relatively small measure. If they are able to evade human domination (by spreading plague, for example), they are usually persecuted for it. Buildings understood as third natures, as dirty and noisy assemblies, try to redress the balance, understanding this reciprocal relation between species in a given environment as a small-scale testing model – a local, distinct and artificialised ecotope – of wider systems of mutual interdependence at a completely different scale.

Black Cloud is a gigantic open cage that connects a former slaughterhouse to the Monte dei Cocci, an artificial hill in Testaccio, built up of shards of ancient Roman amphorae. It is a tool for redefining the relationships among humans and postnatural species. The cage – an artificial ecotope inhabited by starlings – allows us to revisit the way we interact with the animals (including invasive species) that live with us in big cities, the use we make of different species, and the way we perceive animals culturally. The strange cage is an open knitted basket that serves as a temporary communal roost for the immense swarms of starlings that arrive in Rome each spring, dyeing the sky black with their clouds. They dance in the air in beautiful murmurations, but they also pollute the city with their droppings. But instead of considering this as an invasive plague and potential threat and persecuting the starlings as part of our all-round sanitising of the environment, the massive building gathers up the waste so that it can be converted into electricity and basic construction materials.
The two surfaces of the cage define a series of linear and twisted bars that replicate the branches of the plane trees along the banks of the River Tiber where the starlings construct their nests. Droppings are gathered in the lower part of the cage, through hoppers and a system of conveyor belts. The space inside is long enough to allow the starlings to fly, and ends in both edges as a raceme for different purposes, organised as bird traps. The cage’s geometry is based on a central structural bar which branches at both ends – an evolution of the kind of construction system developed by Le Ricolais, based on a central bar and rings that work in compression and define the exterior surface, subjected to stress. The central bar is also the piece that holds the system of internal routes. Visitors can enter the Black Cloud via platforms that take them from the former slaughterhouse, the site of the industrialisation of meat production and animal suffering, to the second component of the institution, an archive of genomes of postnatural species. The archive is a huge excavated pit in Mount Testaccio’s western slope and is organised as a robotised columbarium (replicating the ancient Roman type) which gathers the genetic material of animal species that humans have modified either directly (through domestication or breeding) or indirectly (through creating artificial ecotopes such as cities or parks). 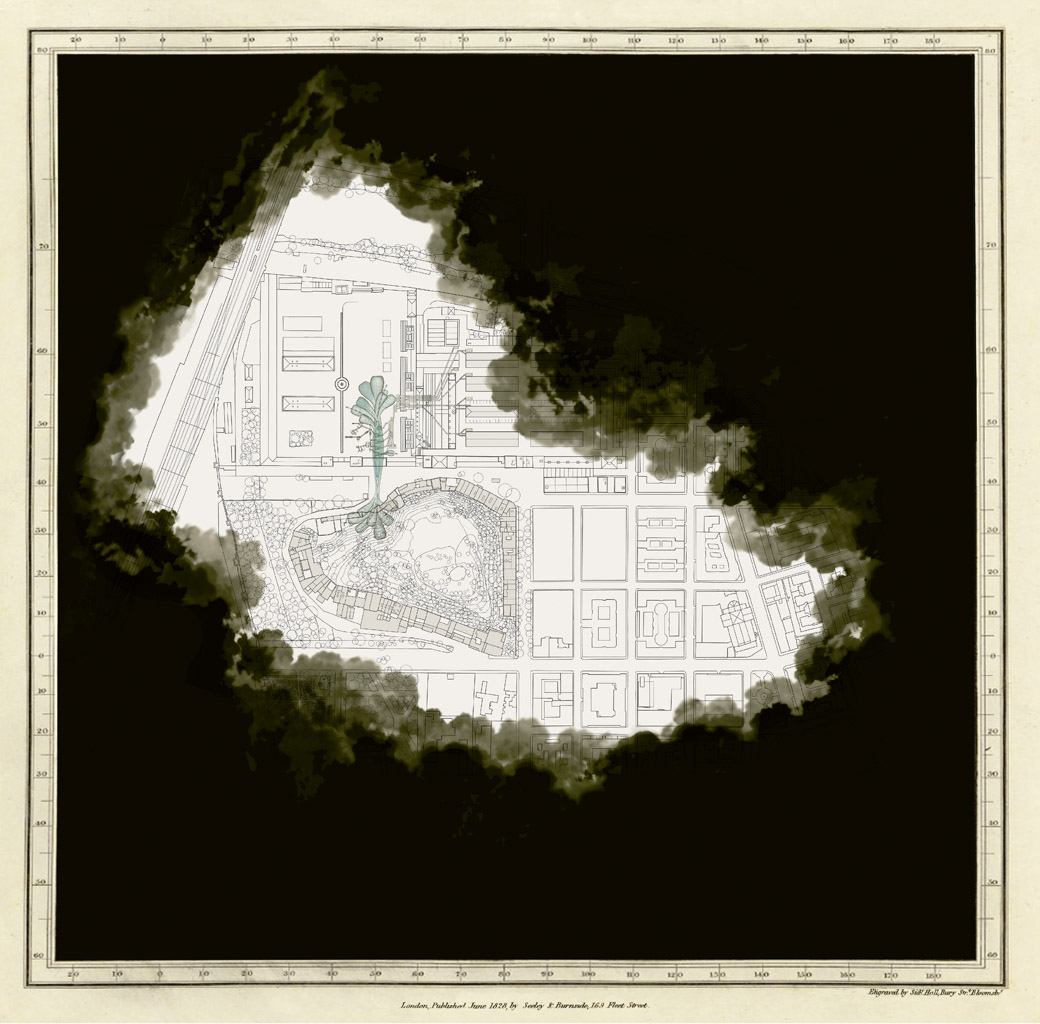 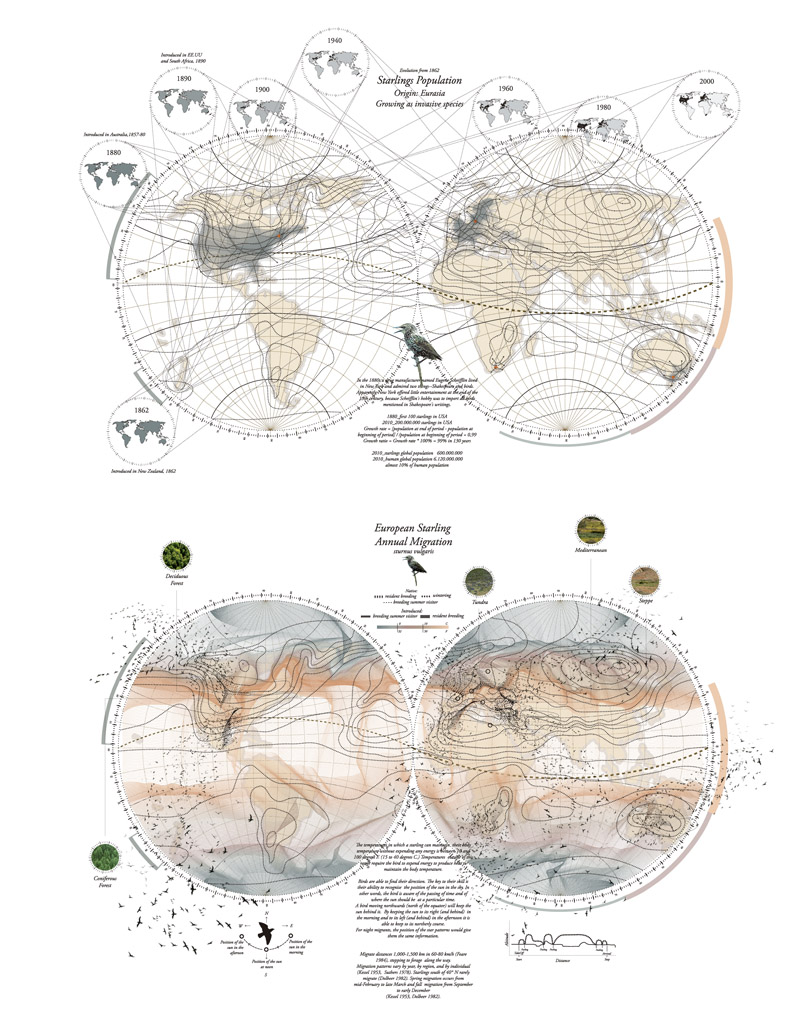 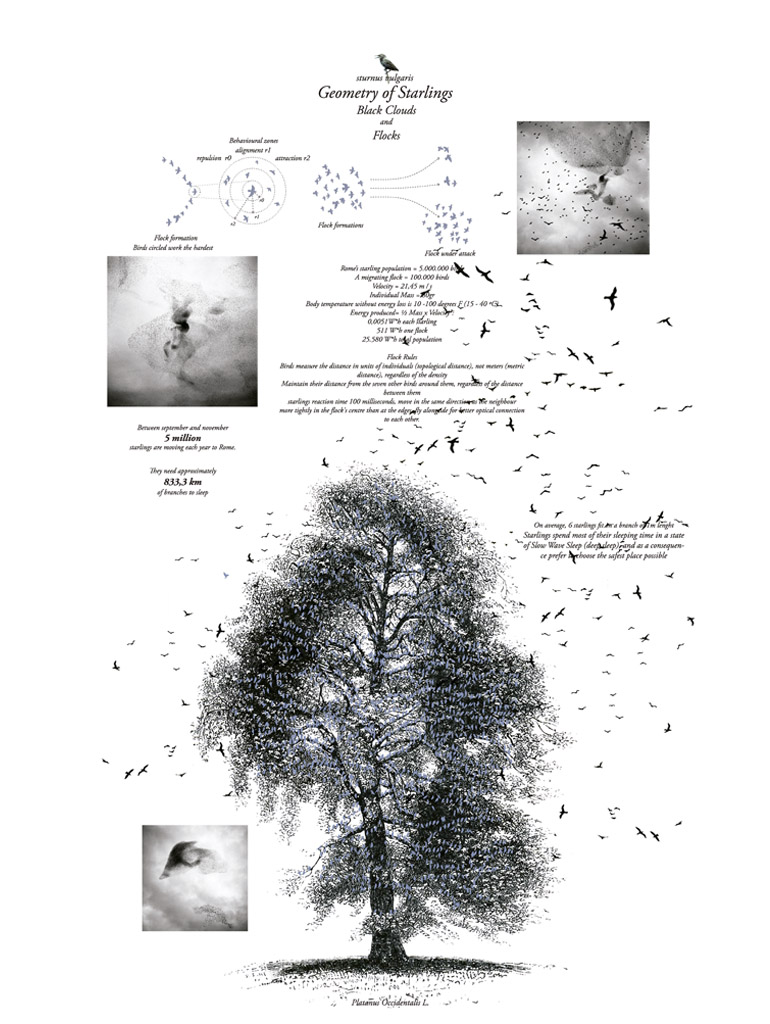 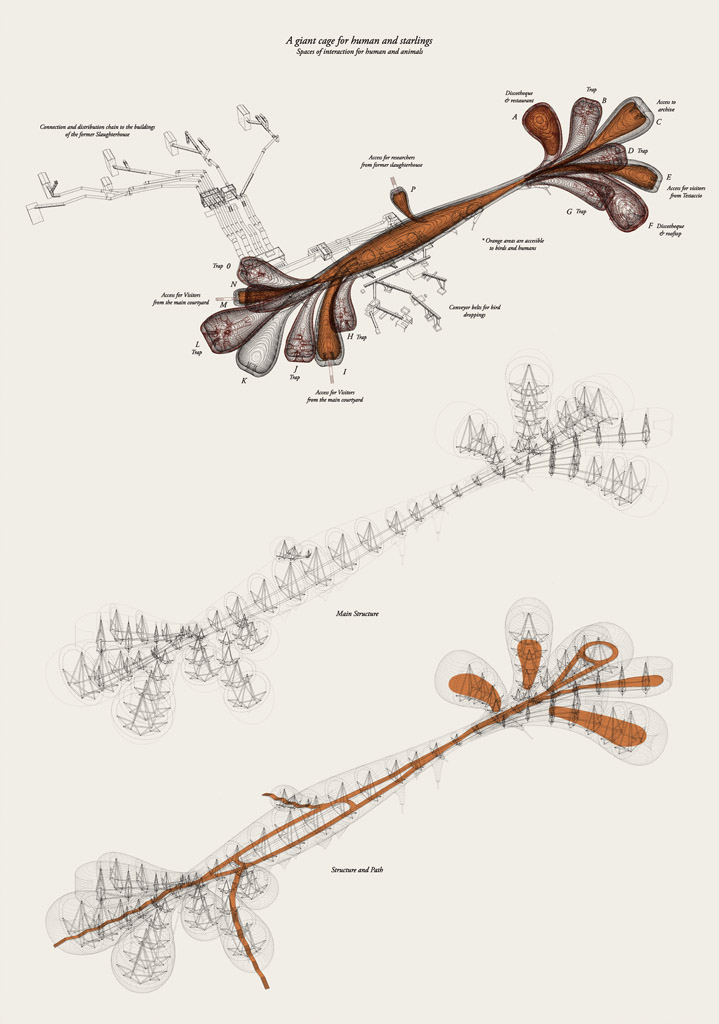 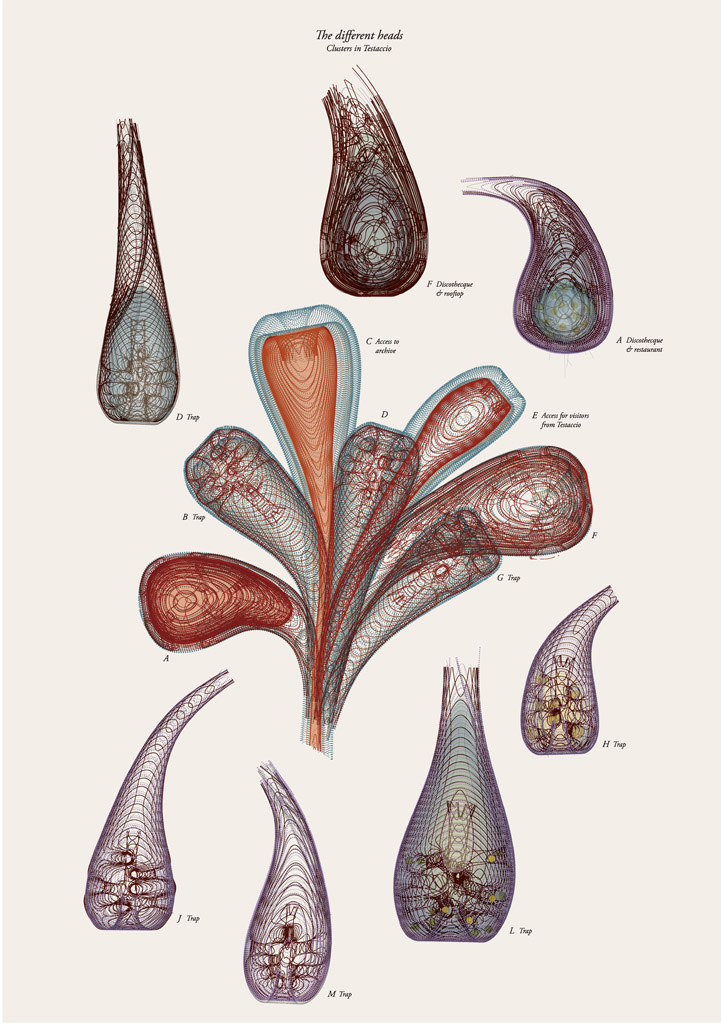 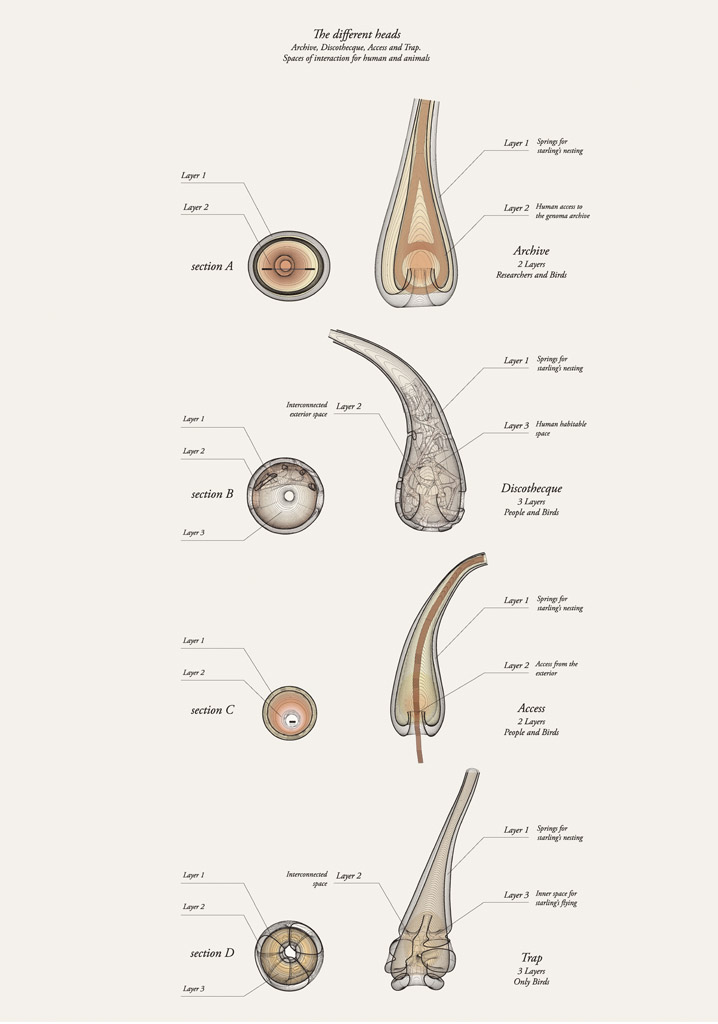 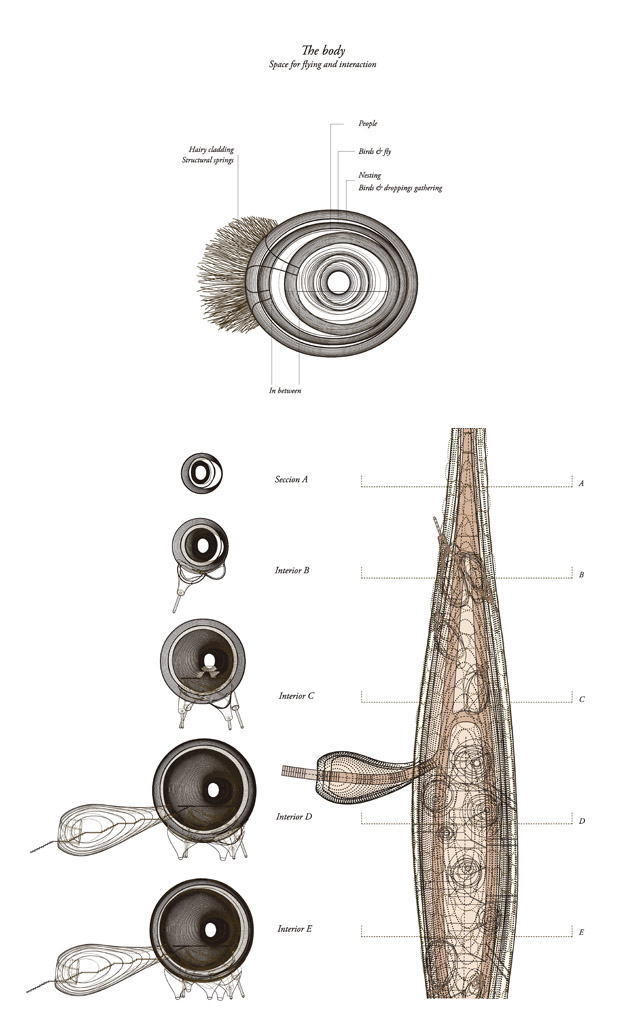 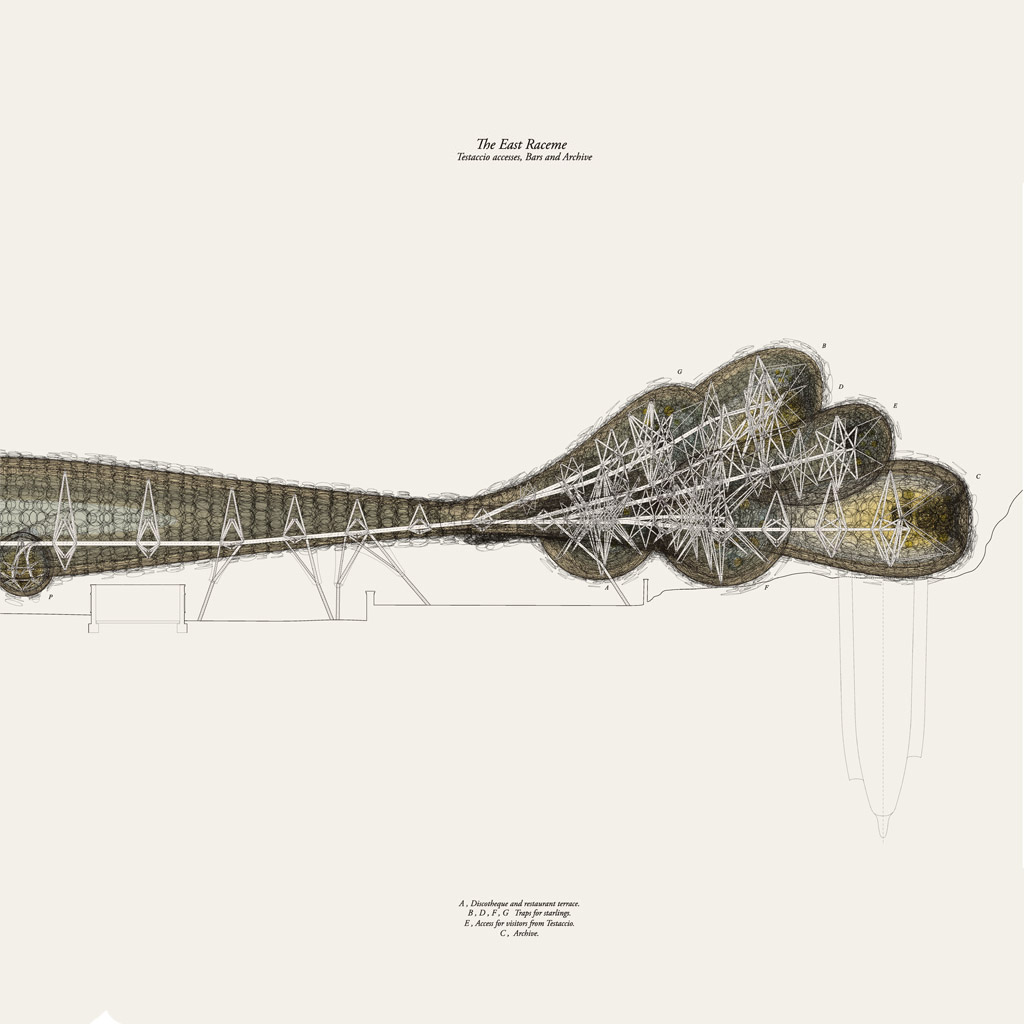 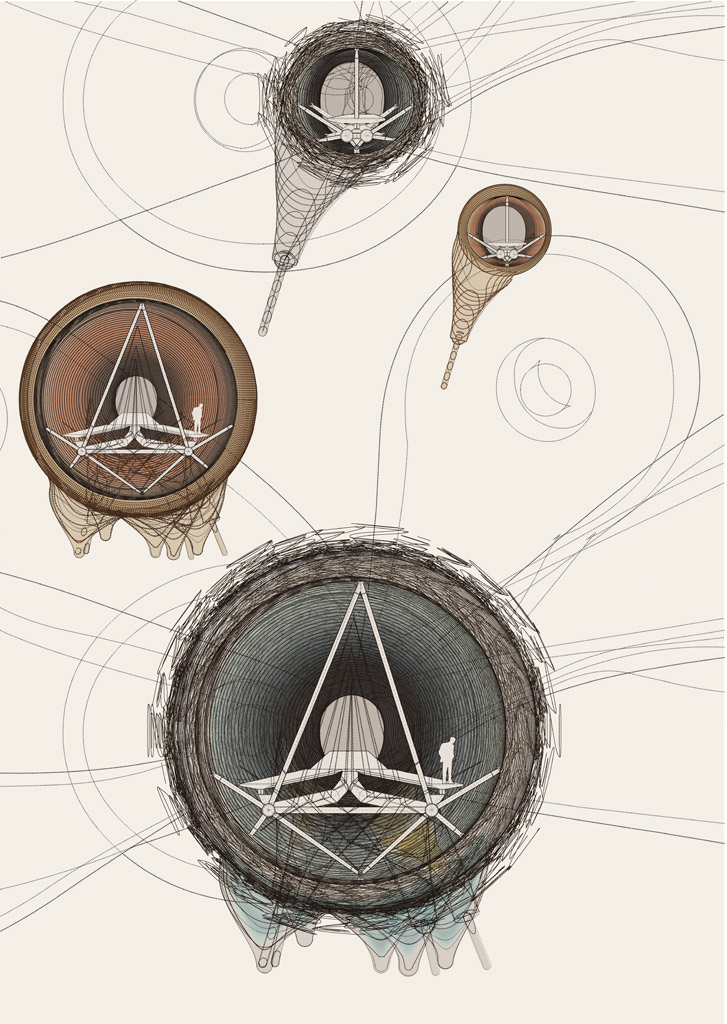 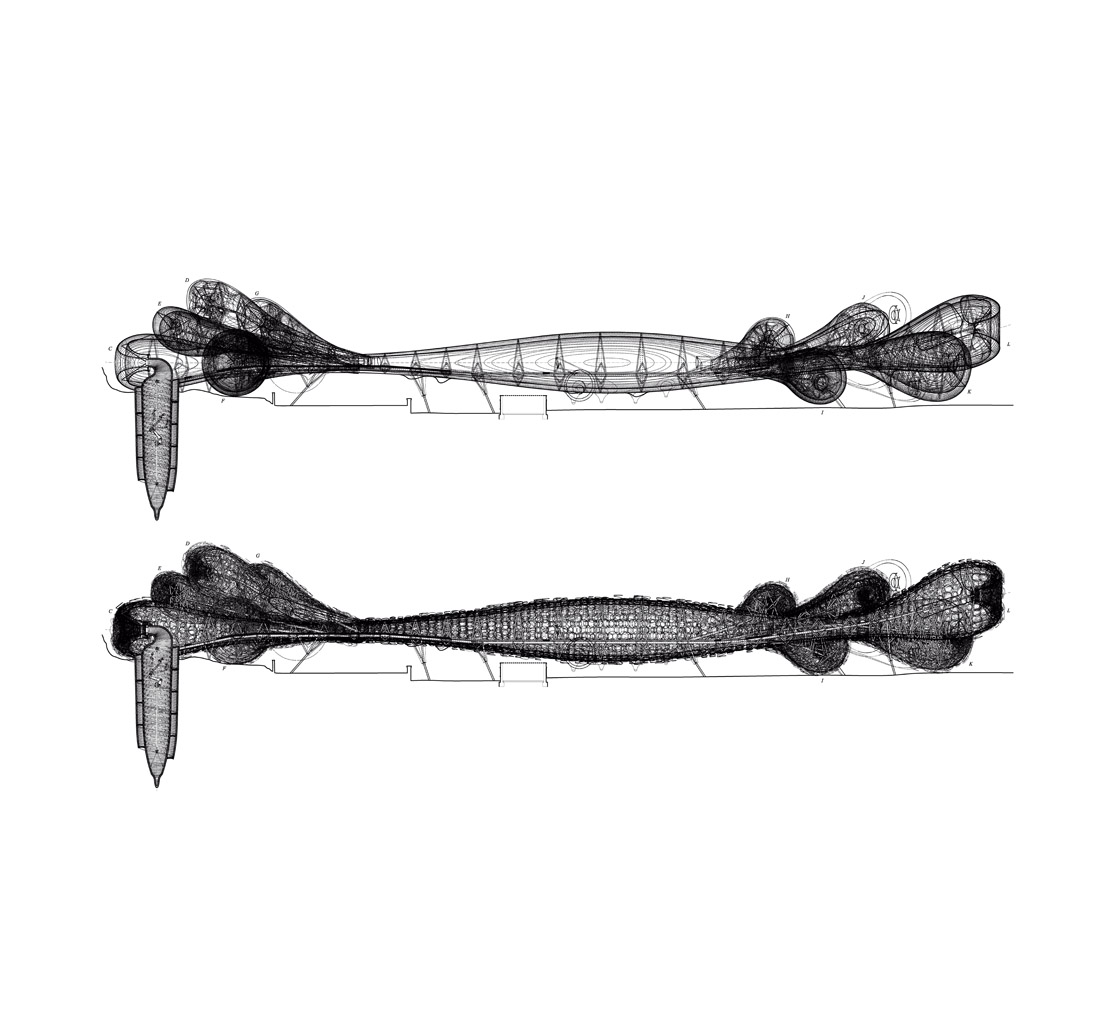 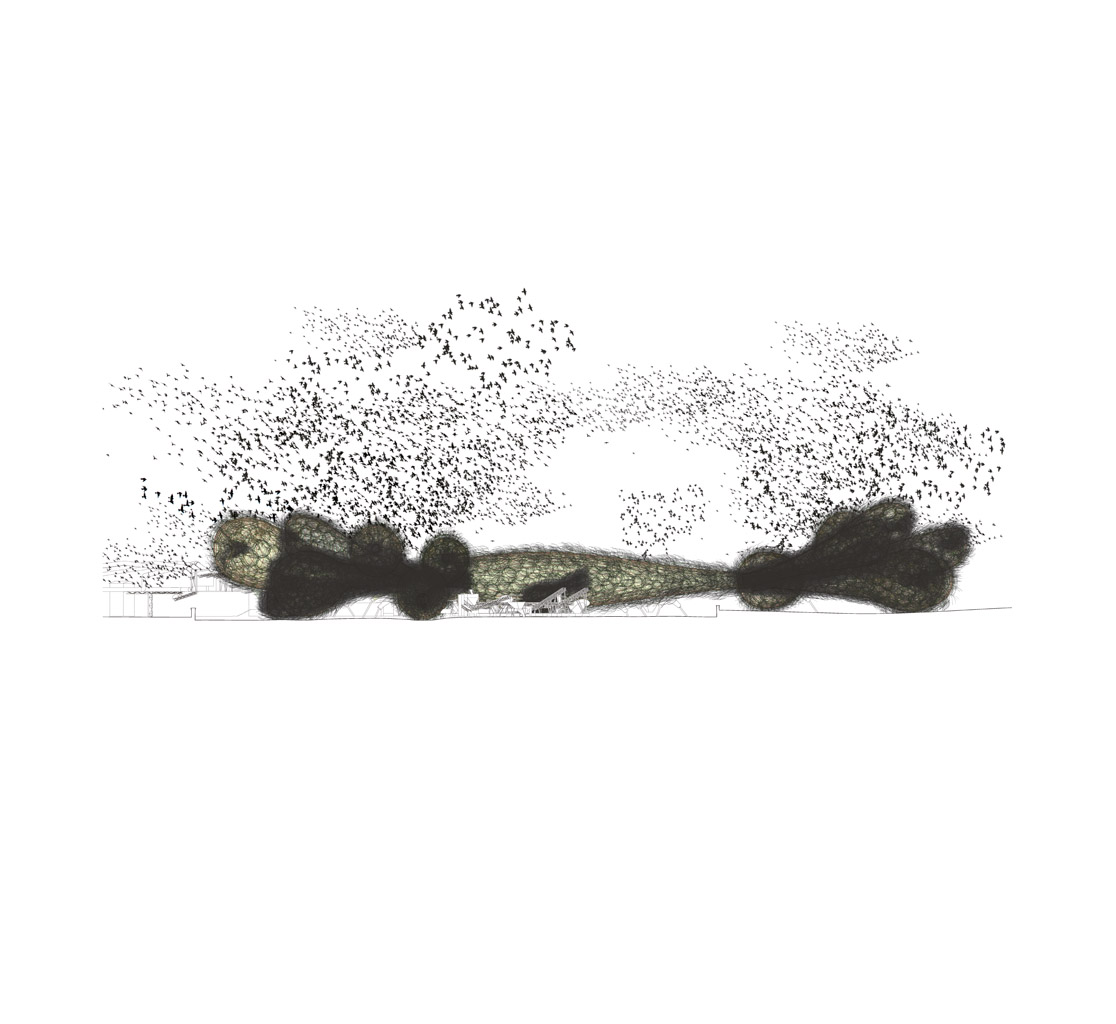