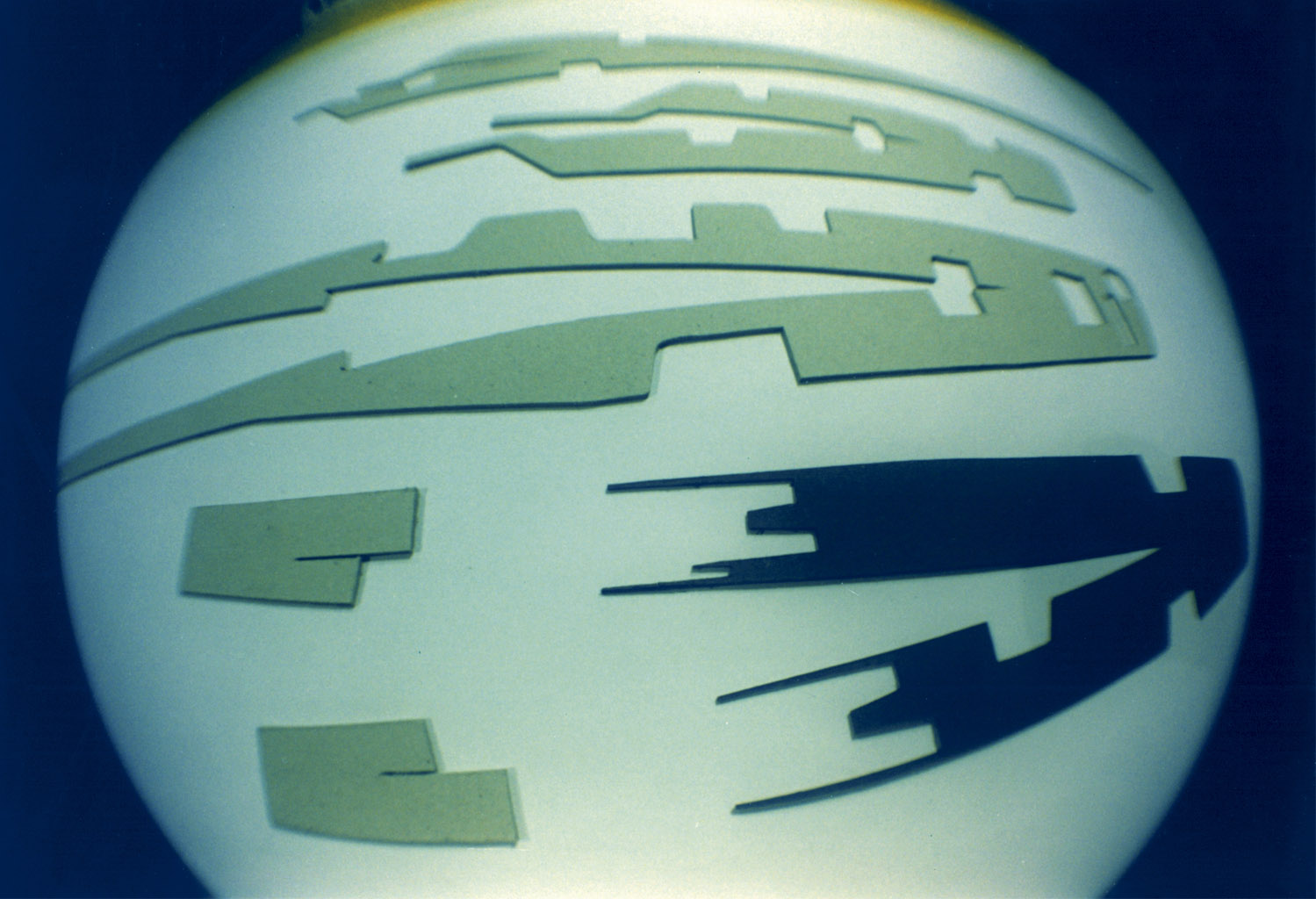 There is no sea in Madrid. No beach. Not even a river, or what is understood as a river.
Placed in the geometric centre of a country surrounded by the sea, this capital city (four million inhabitants) is 400km away from the nearest beach. The target (seemingly an impossible dream, pursued by its inhabitants for more than four centuries) is to bring the sea to Madrid. The aim, at the same time, is to provide new places for the city that are able to receive emerging (both known and as yet unknown) public activities that would otherwise be obstructed by the presence of a centralising bureaucracy and the irresistible but fatal spread of temples of commerce everywhere.
The Artificial Sea is inserted into and parasitizes the transport network, transforming its functional and utilitarian nature into an enclave of leisure activities and pleasure. Conceived as a series of transportation webs, the units are concentrated in points of major flow – knots and flyovers. They are part of the infrastructure of the city; therefore they appropriate the configuration and formal laws that lie in the elements of this system. The shape of the Artificial Sea arises from a simple idea: its elevated position over the ground and the way it inserts itself into the existing communication system. The upper deck, a continuous landscape, is an artificial topography over the horizon of the city, available as open public space free of preset programmes or rules. In summer, the dents and depressions of the endless landscaped ground will be filled with water, generating a constellation of ponds suspended over the network grid.
Each unit is conceived as a continuous ribbon, a loop of interlocking warped grounds that form a complex system of flyovers that shelter alternative and anomalous forms of getting together and host a programme of activities waiting to be completed. They are lodged in the ribbon ruled by laws of attraction and compatibility between activities: houses by the hour for singles or indeterminate social groups, shelters for abandoned children or the homeless, artificial beaches, gyms, pleasure gardens, restaurants, bars, gay saunas, second-hand book libraries, alternative portable cinemas, free universities, cheap parking lots, self-regulated markets. In short, these are public spaces without pre-established rules. (Strata one (upper level): roof, artificial beach, public space. Strata two: access, housing, public space. Strata three: complementary functions, garage, public space. Strata four: open parking lot.) 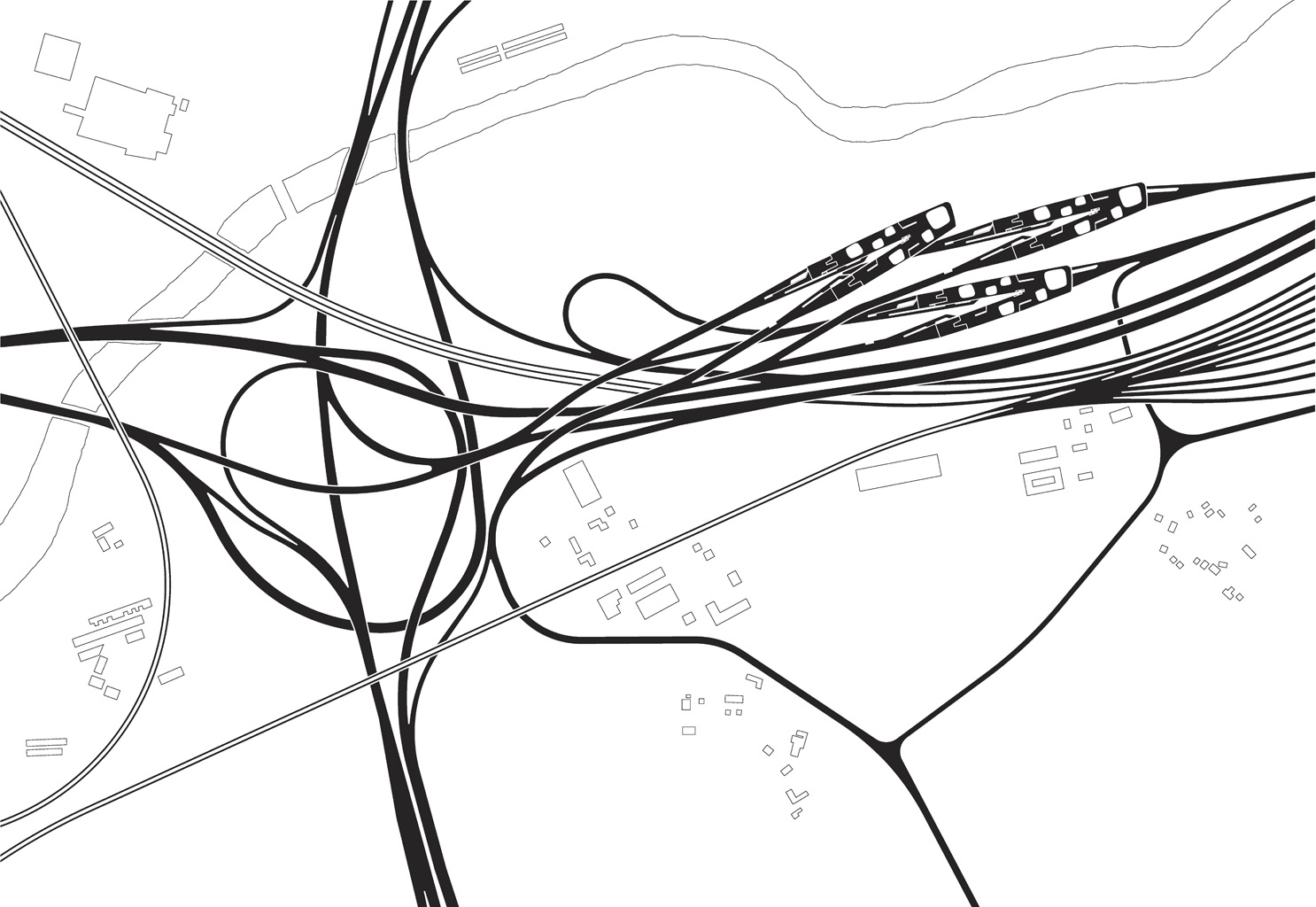 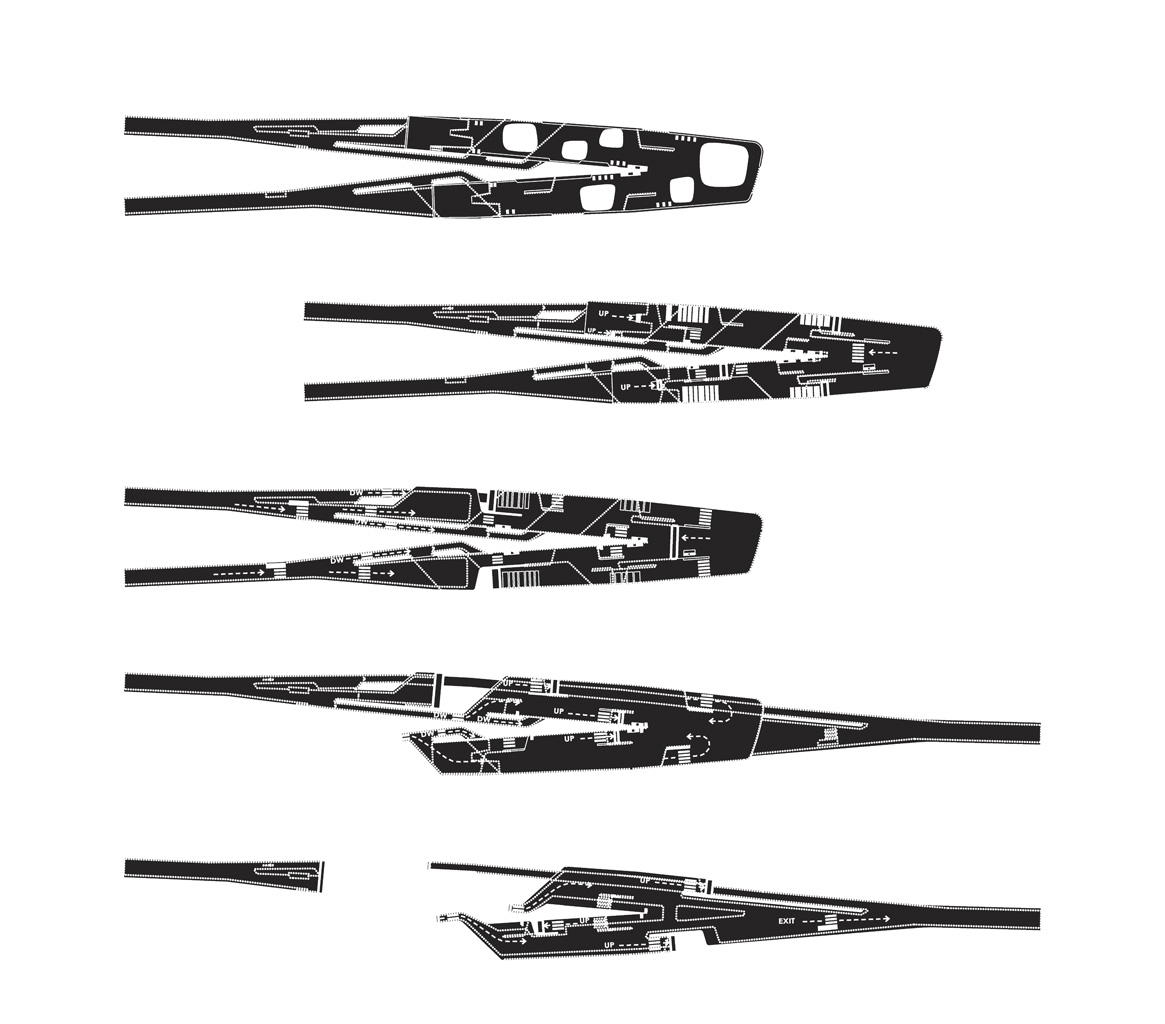 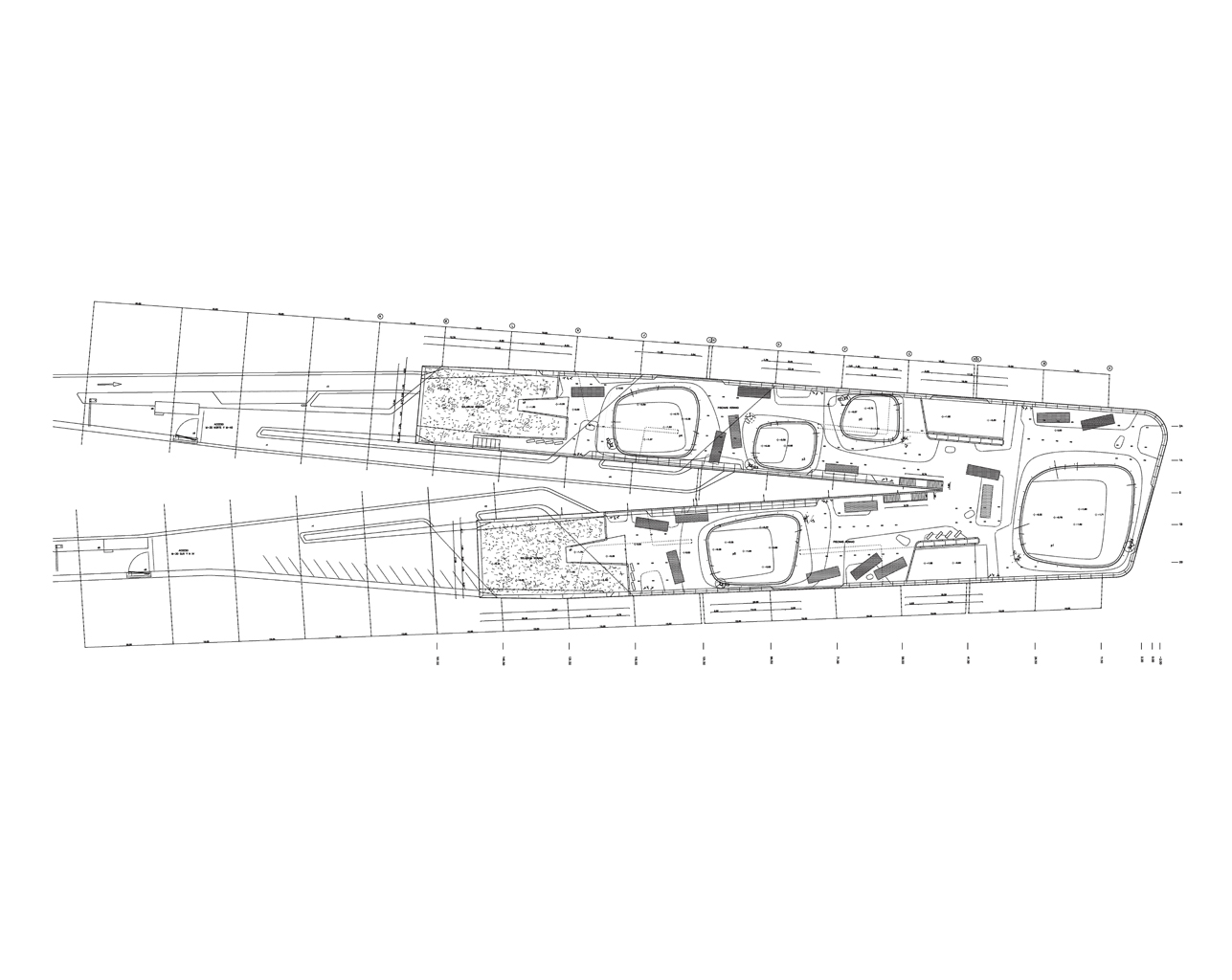 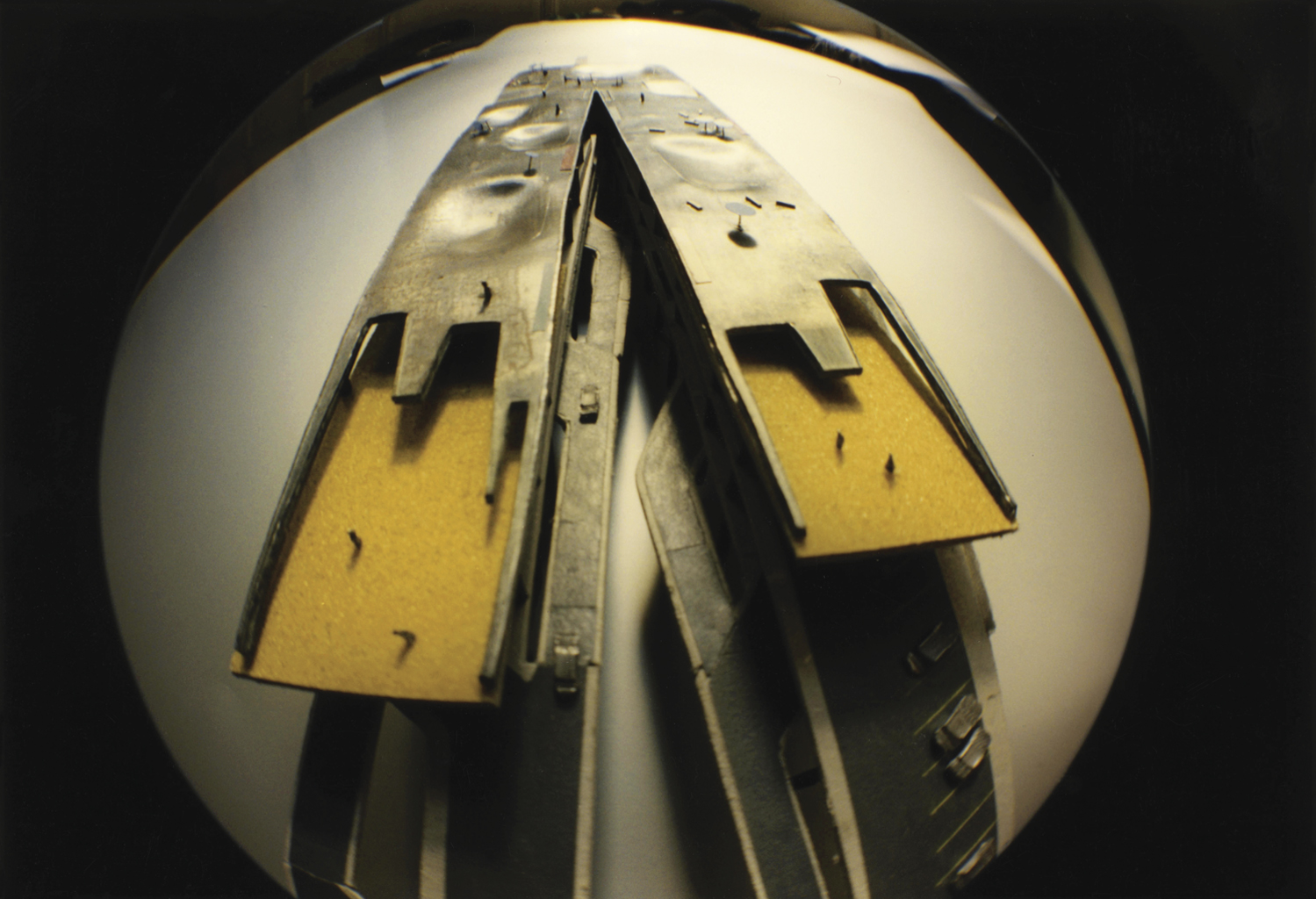 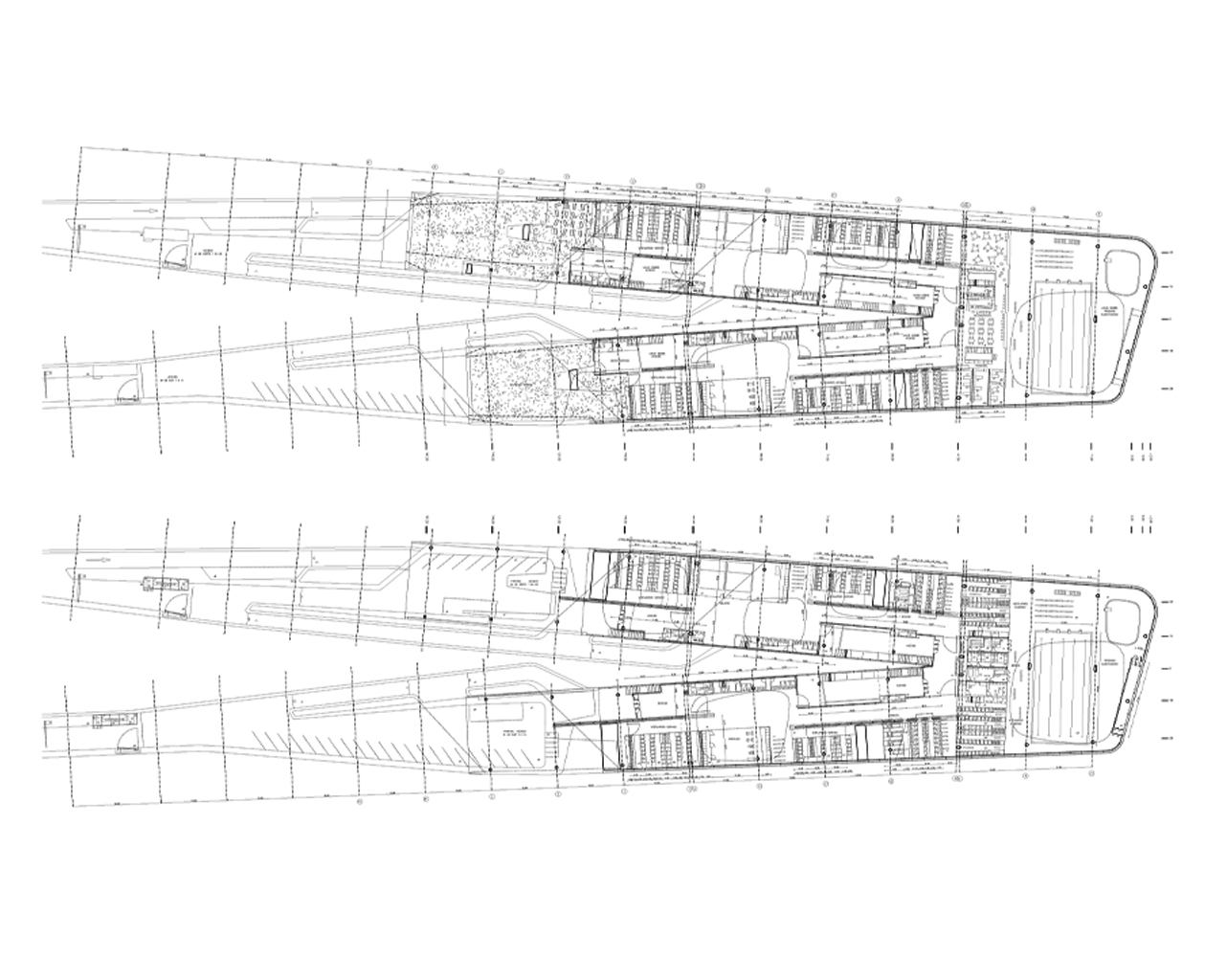 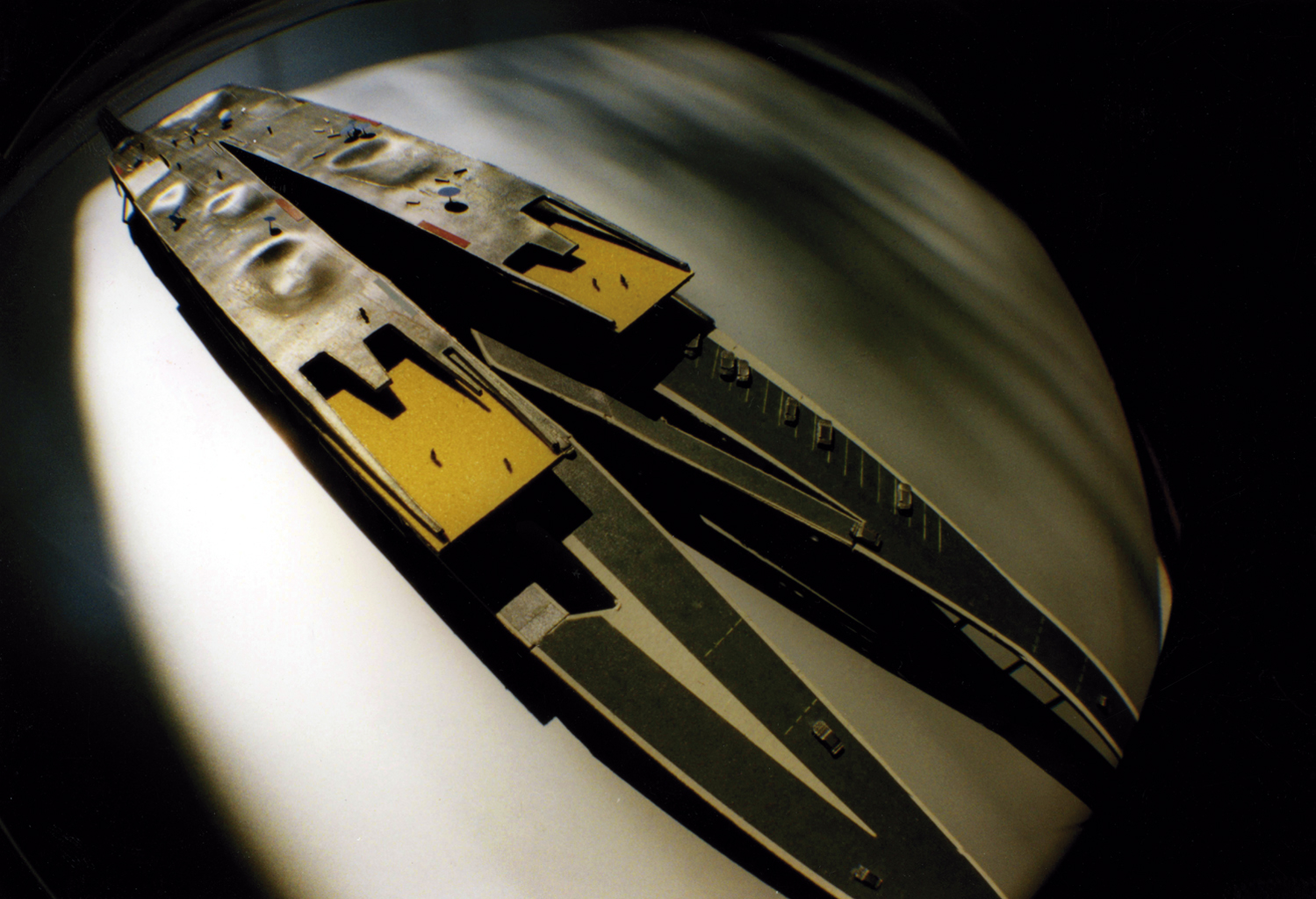